Silva Screen Records: "JOE STILGOE - THE HEAT IS ON" on Cd 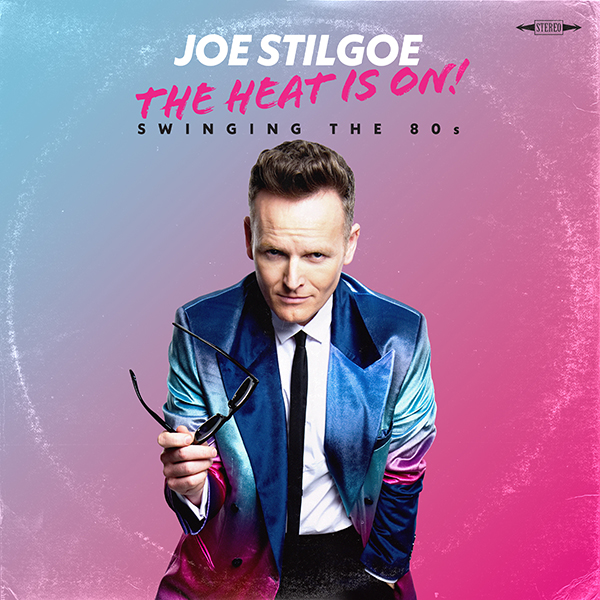 “What if all these songs from all these life-changing movies were actually big band classics?”

On June 28th Silva Screen Records will release Joe Stilgoe’s album of 80s movie hits arranged in a 50s big band style. To celebrate the album release, Joe and his Mighty Big Band will be performing at Ronnie Scott’s in London on 30th June, 1st and 2nd July.

This is the first time Joe has collaborated with Silva Screen on a solo album. Speaking about the project, he says “this album basically is my childhood. Mixing the movies I was obsessed with and the big band music I felt such an affinity when everyone else was listening to A-Ha.”

The album continues Joe’s much loved and critically acclaimed style of combining great songs from the past with an exciting and relevant new spin. Connecting the dots between the 50s and 80s, THE HEAT IS ON! shines a spotlight on some of the greatest movie songs from 80s blockbusters - Beverly Hills Cop, Bill and Ted’s Excellent Adventure, Batman, Short Circuit, The Karate Kid and many more. Using the great arrangers of the 1950s as inspiration - Nelson Riddle, Robert Farnan, Sammy Nestico - these classic songs are almost unrecognisable in their new guise as perhaps the lost standards from the decade of swing and rock ‘n’ roll.

Says Joe - “Growing up in the 80s in Southern England wasn’t much like the movies, but on the daydreamy days I would imagine I was Tom Hanks in Big, Michael J Fox in Back To The Future, Judd Nelson in The Breakfast Club and sometimes even Mary Stuart Masterson in Some Kind Of Wonderful. I fell in love with the music from American films, as they seemed to have everything I longed for - the wide streets with white clapboard houses, perfect front lawns and strangely amenable older residents with hoses, the bikes with armchair seats ridden by the kids in ET, the sense of adventure and stories in Stand By Me, the massive drums and massive choruses from those ballads that only the 80s knew how to deliver. All that was missing for a boy who would go on to dream of singing with a big band was that - big bands. I don’t remember any big band music from the 80s, or at least, none that reached me. So, for this album, I thought we’d bring it all together. What if all these songs from all these life-changing movies were actually big band classics?”

Reunited with old university friend and award-winning composer / orchestrator Evan Jolly, Joe remembers a key conversation – “Evan and I were destined to work on this together - we'd known each other for years since studying for a music degree. I still remember the conversation at our university jazz bar (every Tuesday in the staff canteen) when Evan said “Joe, if you ever get to record a big band album, can I be the arranger?” To which I of course replied, “That won’t ever happen, but YES!”.

Joe Stilgoe is a true modern-day entertainer, known globally as a performer of wit, style and a level of musicianship which has seen him be recognised as one of the best singer-pianists in the world. Always searching for a new way of bringing not only his own songs, but those he loves from the past to a new audience, he is, as some have described, a blend of his heroes Harry Connick Jr, Danny Kaye, Nat King Cole and Dudley Moore.

He has released 5 critically lauded albums, three of which have topped the UK Jazz chart, and as a live performer he has toured around the world with his band and as a solo act, appearing in festivals, jazz clubs and concert halls from Ronnie Scott's to The Albert Hall to Birdland in New York. He is frequently a guest performer with orchestras including The John Wilson Orchestra, RLPO, RTE and the BBC Concert Orchestra, and regularly puts together his own big band for sold-out shows across the country. He hosts annual shows featuring illustrious names from the worlds of theatre, comedy and jazz at Crazy Coqs in London - Joe Stilgoe and Friends, and his Christmas specials at the Lyric Hammersmith have included Rob Brydon, Jamie Parker, Scarlett Strallen and Meow Meow. He made his Albert Hall debut as a special guest with Guy Barker’s Big Band in 2017 and was invited to return to star in Guys and Dolls in 2018. He has created award-winning shows for the London Jazz Festival including A Tribute To Gene Kelly at LSO St Lukes, Songs On Film at Cadogan Hall (plus two Edinburgh Festival seasons and UK tour), and last year Joe Stilgoe & His Big Band at St Johns Smith Square. He has also recently moved into theatre writing, creating the songs for two hit shows - The Jungle Book in 2017 and The Midnight Gang in 2018. [http://www.silvascreenusa.com]