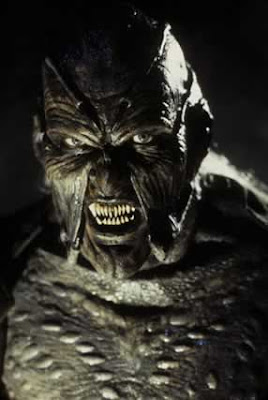 The Creeper is back! The story takes place first in the Old West, giving some Creeper history, then jumps to the end of the third film, on the eve of a brand-new 23rd Spring. Gina Phillips reprises her role, now 23 years older and with a teenage son whom she keeps having recurring visions will meet the same fate as her brother. She's determined to bring the monster's reign of terror to an end once and for all.

As director Victor Salva promises, "brings back all the classic ideas of the first film, but brings them horrifyingly full circle. It also revisits characters from both, lets us learn more about what the Creeper is and, by popular demand, reintroduces the infamous Creeper truck."
Hosted by Unknown at 5:14 AM

keeping my crosses crossed and my eight fingers... and two thumbs.

Wow you weren't kidding when you said you had wallpapers! Cool blog too. I love the Creeper, are they still calling it "Cathedral"?

thank you captain... last i heard it was calling it... but in the end it could be called winged vigilante... lol

Just hope convicted child molestor Victor Salva (molested a 7 year old boy who was in one of his films)doesn't show half naked young boys like he did in the 2nd movie - that gave me the creeps.

zoinks kathryn, i never heard any of those things... i am going to read up on it...okay just did on:

why is this goof ball still in the business... very sad!

thanks for the sheding of the light!