Intrada: "DORA AND THE LOST CITY OF GOLD" Music by JOHN DEBNEY and GERMAINE FRANCO 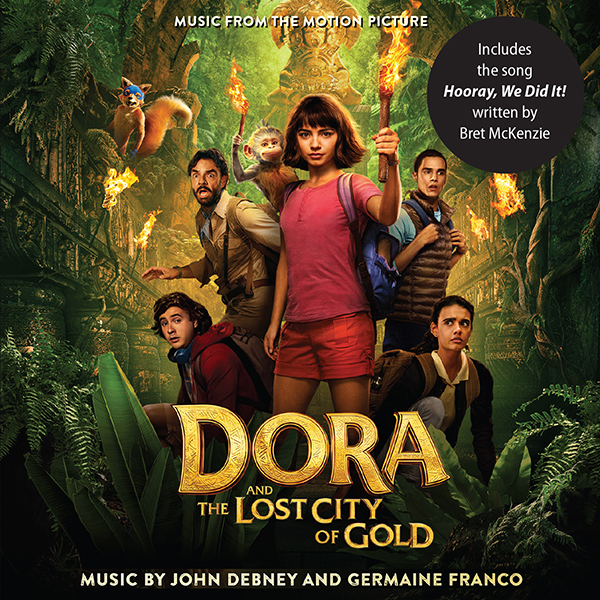 Intrada presents the CD soundtrack to what is perhaps one of the most delightful films of 2019 – Paramount Pictures' Dora and the Lost City of Gold. For this colorful, vibrant and self-aware live-action version of the Dora the Explorer cartoon, John Debney (Hocus Pocus) and Germaine Franco (Tag) crafted a score that could easily keep pace with the fast-moving adventure. Scored for large orchestra, the exciting score is as exhilarating and adventurous a listening experience as the film itself, making for one of the year's best scores. Also featured on the CD is the premiere of Bret McKenzie's "Hooray, We Did It!," the celebratory musical number at the end of the film.

Dora (played to perfection by up-and-coming actor Isabela Moner) has grown up in the Peruvian jungle, having many adventures with her cousin Diego, her monkey Boots and her imaginary friends Backpack and Map, and masked villain Swiper. Diego leaves the jungle at age 6, leaving Dora alone. Ten years later, Dora's parents send her to Diego's high school in LA to protect her when they discover the location of the lost city of gold. A fish out of water in every sense, Dora has a hard time fitting in, until she and her friends are kidnapped and taken back to the jungle, where Dora discovers her parents have vanished and it's no longer clear who she can trust as she tries to evade villains and find her parents. Filled with self-referential humor, tongue firmly planted in cheek, Dora and the Lost City of Gold brings back the delight of family adventure films.