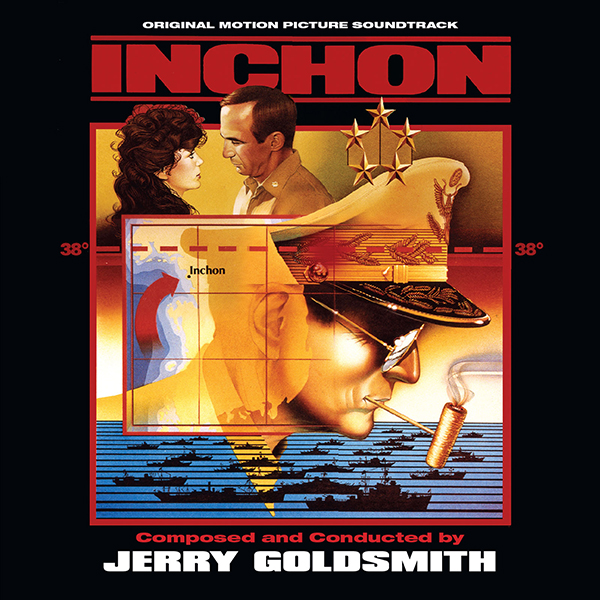 Intrada announces a hi-res (24-bit, 96kHz) digital release of Inchon – one of its best-selling albums. Jerry Goldsmith's 1982 epic war score, previously reissued three times on CD, is now featured in this digital release, allowing for a dramatic improvement in detail and depth in the quality of music over what one can hear with the the more common 16-bit, 44.1kHz CD format.

To commemorate this release, Intrada is also making Inchon available for a limited time in a newly packaged 3-CD set. Although not able to take advantage of the hi-res format, the new mastering still improves over previous releases. This CD release will only be available for 45 days and goes off sale 1/30/2021 or when supplies run out. After that, the title will live on in the hi-res digital format.

This new edition includes three programs.The first two are the same as previously released: the original LP presentation as Goldsmith had initially presented his score, plus a second disc featuring the complete score, retaining all of Goldsmith's assemblies from the LP presentation. The third disc features the entire, un-assembled score in film order. This allows the listeners to hear openings and closings of many tracks previously unheard.

The film may be forgotten, but what lives on is Jerry Goldsmith's dynamic, colorful and percussive score. The score features an augmented percussion section, including snares, bass drum, cymbals, timpani, triangle, xylophone, woodblocks, boo bams, and many others. At the time of the film's release, Goldsmith had artfully assembled a 38-minute album capturing the highlights and delivering an irresistible listening experience. Intrada has since expanded the score to feature all of Goldsmith's powerful and colorful score.

The 1982 epic chronicles the massive-force invasion of Southern Korea led by General Douglas MacArthur. The film had all the right ingredients: a cast that included Ben Gazzara, Jacqueline Bisset, and none other than Sir Laurence Olivier in the role of MacArthur; James Bond veteran director Terence Young at the helm; and a world-class composer – the unequaled Jerry Goldsmith, who gave the film its spirit. Nonetheless, the production was plagued with both natural and man-made troubles, resulting in a film that cost over $44M, was cut from its original 140-minute length to 105 minutes when it went into "wide" release in September 1982, closed relatively quickly, and fell into obscurity.