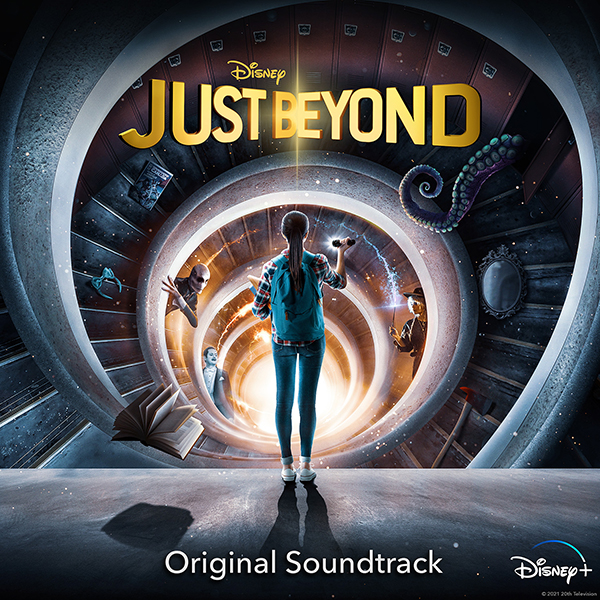 The JUST BEYOND ORIGINAL SOUNDTRACK was released today via Hollywood Records and is now available on all digital platforms. The original score was composed and produced by acclaimed, two-time Emmy Award-winning composer, Carlos Rafael Rivera (“The Queen’s Gambit,” “Hacks,” “A Walk Among The Tombstones”) who deftly captures the essence of each storyline in the eight-episode series and had this to say about the project, “Scoring a Disney Project has been a lifelong dream, not only in getting to work with the likes of Seth Grahame-Smith and Marc Webb, but being part of the musical story telling that makes us all feel that Disney magic!” JUST BEYOND is now available to stream on Disney+.
Inspired by the writings of R.L. Stine, “Just Beyond” is an eight-episode anthology series that tells astonishing and thought-provoking stories of a reality just beyond the one we know. Each episode introduces viewers to a new cast of characters who must go on a surprising journey of self-discovery in a supernatural world of witches, aliens, ghosts and parallel universes.

CARLOS RAFAEL RIVERA is an Emmy and SCL winning composer, whose career has spanned several genres of the music industry. Having scored one of the most viewed NETFLIX Limited Series of all time, THE QUEEN’S GAMBIT, starring Anya Taylor-Joy, and helmed by writer/director Scott Frank. Carlos won a Primetime Emmy Award for THE QUEEN’S GAMBIT and was nominated for World Soundtrack Awards’ TV Composer of the Year, while having received an SCL (Society of Composers and Lyricists), a Hollywood Music in Media (HMMA), and two International Film Critics Association (IFMCA) Awards.

His work for Film and TV includes scores for Netflix’ GODLESS, for which he also received a Primetime Emmy, Universal Pictures’ A WALK AMONG THE TOMBSTONES, starring Liam Neeson, the hit TV show and 15-time EMMY nominated show HACKS for HBO Max, starring Jean Smart, as well as JUST BEYOND for DISNEY +, and LA REINA DEL SUR 3 for TELEMUNDO.