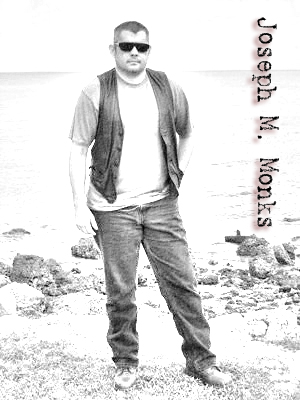 ABOUT:
Joseph M. Monks was born in Queens, New York on February 21st, 1968, and while he no longer lives in the state, he will always consider himself a New Yorker.

His family upped and left for the ‘burbs in 1977, and Joe rooted himself in Valley Stream, NY, where he began a pursuit of two rabid passions: hockey and writing. Joe began writing when he was nine and has not looked back, particularly in recent years. Undaunted by the loss of his eyesight in 2002 (the result of Monks’ long-time battle with diabetes), the then-33 year old author completed his first anthology of original fiction, Stuff Out’a My Head, released in December of the same year.

Joe continues to write original short fiction, in addition to branching out into the world of screenplays and filmmaking.

Despite blindness and surprising many, Joe returned to the comic book field, where he got his start as co-creator of the cult phenomena horror title Cry For Dawn. Shrugging off the inertia of his ex-partner and continuing to be a driving force in independent horror, Joe released a spate of successful comic book titles including The Night Terrors, NightCry, Tales of the Dead and several one-shots.

Joe’s recent comic endeavors have included Gory Lori, a modern day zombie apocalypse series illustrated by Jeff Salisbury and Mike Koneful, and the horror anthology Zacherley’s Midnite Terrors, featuring the television horror host of the same name. In addition to getting the opportunity to work with The Cool Ghoul, Joe has enjoyed his experiences working with such legendary talents as Basil Gogos, William Stout, fantasy artist Ken Kelly, and others.

In 2003, one of Joe’s short stories, “Chance Meeting,” was optioned for adaptation to the screen by Japanese publishing powerhouse Bunkasha in tandem with DK Publishing. Joe was offered the opportunity to take a stab at the script for the short, , which was to have been used as a television pilot in Japan. The script was green-lit and produced, though the producers decided to take the property, starring supermodel Matsuo Otani, and release it as a stand-alone DVD instead. Accompanied in the hungry Asian horror market by a hardcover photo book, it was a runaway success. The adaptation of the story (which appears in Stuff Out’a My Head), received critical acclaim in the Far East and has done so in the United States as well, notably after it screened at the New York Horror Film Festival. The experience of working in film (Joe not only wrote the script but has a slightly larger-than-cameo role in the pilot) has pushed Joe on a path towards fulfilling another long-time goal, that of directing his own feature film. With The Bunker, Monks is seeking to break new ground once again.

Joe lives in Southwest Florida with his wife, Pamela, their dog, Luna, two black cats, Midnite and Shadow.
Hosted by Unknown at 2:00 AM