Robert Feigenblatt - Composer
THE BUNKER
About Robert: Actor & Composer RobertBorn in New York City in 1957, Robert has called Southwest Florida his home since 2002. A lifelong love affair with the arts which germinated in high school culminated in 2006, with Robert auditioning for and being cast in a community theatre production of “Arsenic and Old Lace“.   Due to a sagging economy, in early 2009, Robert was laid off his job, allowing him to finally devote himself to writing and composing full time.

[2v8]: Tell us about you and your steps to being involved in the music field from performing to composing?

I have always loved film and film music. From am early age, I was one of those strange kids who actually noticed the background score in a movie. I quickly learned that most people do not, after inquiring a few times: "Hey, wasn't that score great in Planet of the Apes?" and the answer was always accompanied by a look that could only be  described as a freshly washed blackboard: "What music?"  Growing up rather poor, I wasn't able to get my hands on a piano until I was 19. And then, my dreams of music and film and theater (I also have a passion for acting) were set aside for work, marriage and 3 children. It wasn't until two years ago, when I was laid off that I decided to take the plunge and compose. Armed with a music program for my laptop, a piano and 5 orchestration books, I took a deep breath and wrote a stage musical, "Ebenezer Scrooge". Because I work cheap, I composed the score, wrote the lyrics and adapted the book. It must have turned out well, it has seen two local stagings in two successive years. I also served as musical director for 'Mame" at a local community theater and have both written songs and incidental music and played piano on stage. My boyhood dream of actually scoring a movie came to fruition thanks to Joe Monks and THE BUNKER.

[2v8]: With score for "The Bunker" getting released by "Howlin Wolf Records" before the film, what effect or impact do you think this might do for the film? 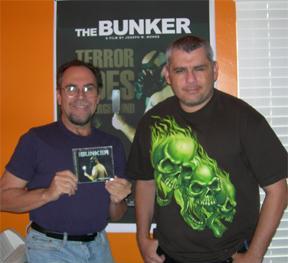 Thanks to Wall and his pack at Howlin' Wolf Records, the CD release of THE BUNKER will definitely help promote the forthcoming home video release this October. Joe plans on offering the soundtrack along with the DVD as a special package deal. The DVD will also include a "making of" documentary featuring yours truly talking about my approach to the film. Although photographically speaking, my best side is when I'm walking away from the camera, Joe and his crew did their best to make me look good.

[2v8]: How did you come to work with director Joseph M. Monks and with his amazing life story, did this effect the outcome of the music for the score "The Bunker"?

Through mutual friends, Joe and I met. Of course we talked movies and music and he told me that his original composer had passed away and that the music he had written was in legal limbo and couldn't be used. I meekly suggested that he might consider giving me a crack at it. I gave him a CD of the "Ebenezer" score. He obviously liked what he heard and the rest is cinematic history. I must admit I was terrified at the prospect for several reasons: It was to be my first score and since Joe is sightless, I knew his hearing would be heightened and my music had to make a solid impact.

[2v8]: How does the collaboration from idea to recording work, especially if you worked close with the director Joseph M Monks?

Armed with a DVD copy of the film (with the original score still in it) I composed about 10 minutes worth and then let Joe hear it to see if what he wanted and what I delivered meshed. We both wanted an orchestral score, no twenty minute drone and a mono-thematic theme that outstayed its welcome. I devised two themes: one for the bad guy and one for Julia (our heroine) and developed them so that the characters and the story had some cohesion. Joe got it, approved of my concept and I ran with it.

[2v8]: What are your thoughts on music companies switching over to only "internet download only", does this hurt the quality and the industry in a nutshell?

I am computer challenged...not a geek at all. And I grew up in the age of vinyl LPs. I miss those splashy jackets and placing the platter onto a turntable and hoping the stylus wasn't going to dig a trench into the grooves. Downloads are so cold and empty. At least with a CD, you still a booklet and a plastic jewel case (when you're lucky) and can hold the physical product in your hands. With the soundtrack market being of limited interest, I hope small run CD pressings will survive.

[2v8]: Best experience working on "The Bunker" and with director Joseph M. Monks?

The overall experience of collaborating with Joe Monks was wonderful. Once he heard my approach, he trusted me to take care of his baby and I felt free to create. As a composer, I couldn't ask for a better working environment.

Currently, I have been cast in two stage plays and am in the midst of rehearsal on one of them. We open in a week. I have also been approached to score a feature documentary on faith. I have been given the first 15 minutes of footage and  have composed around 10 minutes thus far.The film "Why God Quit Talking"  is as far removed from a horror/thriller as one could get and I like that. Although there are worse fates for a film composer than getting typecast, such as not getting cast at all.

[2v8]: Where do you hope with the score release of "The Bunker" will take you or your career?

I'm hoping that the soundtrack release will help promote Joe's film and my burgeoning film composing career. Thanks to the super presentation that Howlin Wolf has done on the CD, I have an impressive sonic business card that I can hand out. Move over, John Williams!

[2v8]: What are some of the worst and best moments in getting your work produced?

I am lucky. I have not suffered any "bad" moments in the creation, recording, dubbing or release of the score. Joe's editor, Eric Valdes championed my contribution from the moment he heard the cues and made sure it sounded and synched up to the picture.

[2v8]: Best advice given to you by someone you used to know, but don't talk too anymore... who, what and why?

The best advice I was ever given was by  fellow film  composer, Terry Plumeri (Scarecrows, Black Sea Raid). He listened to my music and told me I could have a career if I stopped listening to myself and got out of my own way. In short, we impose limits and restrictions on ourselves and that is true. It has taken me 54 years to realize my childhood dream of writing music for movies, but I've done it. Another shining example of an overnight success. Hopefully, future scores will have a shorter gestation period.

Robert Feigenblatt - Home Page
http://www.robertscores.com/?page_id=2
Hosted by Unknown at 2:01 AM

Awesome interview! These guys are without a doubt a very cool and interesting pair. The score for THE BUNKER is phenomenal and I am very excited for October to roll around to enjoy Robert's classic score supporting the film, which inspired its creation. That said, some scores stand on their own beautifully apart from the film and Robert Feigbenblatt's score for THE BUNKER is definitely a prime example. I cannot wait for Robert tackle more horror/suspense film scores!!!!