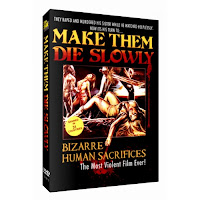 A.K.A: CANNIBAL FEROX one of the best Italian Horror movies of all time!

A small group of anthropologists take to the jungles of Colombia to study the culture of a small indigenous Columbian tribe - a tribe of primitive peoples with a controversial, cannibalistic history. When they arrive however, they find that a local band of drug dealers have moved into the area, and have taken to using the naive natives to harvest the cocoa leaf for them as slave labor. After a while, the natives are tired of being tortured and worked, and turn on their masters - as well as the hapless anthropologists - filling the screen with gruesome splatter in the process!


My Opinion:
I can say only one thing, worst movie ever... now I don't mean worst in bad, I mean disturbing. So the gore is there, the animal modulations is there and the cannibals... what else might you need? I cannot tell you, but do not go making those cooky cannibals mad remember they don't forgot the bad things you may have done. Is it torture or revenge? You will have to decide cause I never ever plan on watching this again, ever.
:)
-Jeremy [iZombie]
Hosted by Unknown at 9:40 AM