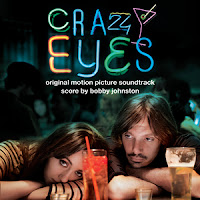 
The soundtrack features original music composed by Bobby Johnston (Mother’s Day, Wristcutters: A Love Story) and new songs by indie artists Stepfather, Gvcci Hvcci, Sister Spaceman and Lindsay Heath.
Zach (Lukas Haas, Inception, Mars Attacks!) seems to be living the Hollywood bachelor dream – he’s got a house in the hills, the phone numbers for dozens of beautiful women and a hard-partying lifestyle aided and abetted by his bartender pal, Dan (Jake Busey, Enemy of the State, Starship Troopers). It seems nothing can tie down this divorced father, until he meets “Crazy Eyes” (Madeline Zima, Californication TV series, The Nanny TV series) – the one woman he can’t have. As the two embark on a love-crazed, booze-fueled relationship, Zach’s family issues begin to take center-stage, questioning whether or not this partying lost boy can step up to the challenge and become a man.  Crazy Eyes was co-written and directed by Adam Sherman (Happiness Runs, Wristcutters: A Love Story), produced by Hagai Shaham (The Details, Mean Creek) and music supervised by Doug Bernheim (Half Nelson, Transamerica).
5/5 Great Hip... Songs and Score is a welcomed "Tom Waits" style...
-Jeremy [Retro-Zombie]