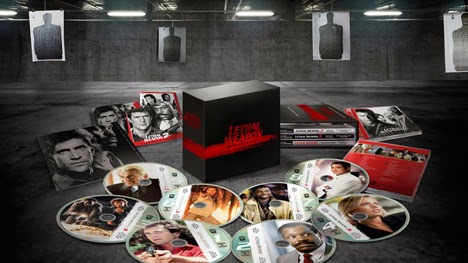 Finally, some of the greatest action film music ever composed -- from the most celebrated cop-action saga of all time -- is presented here in a deluxe presentation worthy of their legacy. The scores to LETHAL WEAPON 1-3 have been greatly expanded beyond their original soundtrack album presentations (the original soundtrack assemblies are remastered and presented as well.) and the score from LETHAL WEAPON 4 makes its world premiere with this set. A bounty of previously unreleased score music is featured here, literally hours worth, along with bonus score tracks and knockout songs from the likes of Sting, Elton John, George Harrison, The Beach Boys and more – not to mention the Bobby Helms rendition of “Jingle Bell Rock,” which opens the original LETHAL WEAPON!

Produced by Neil S. Bulk and MV Gerhard and mastered by James Nelson from WB vault materials, this amazing release, limited to 3000 Units, features a 40 Page booklet with exclusive liners by film music writer Jeff Bond, with new comments from director Richard Donner, and explosive art design by Jim Titus. Once you dig into this sensational set, we know you’ll agree with us – when it comes to Michael Kamen and LETHAL WEAPON, you’ll never get “too old for this sh#*!”

A portion of the proceeds from the sale of this item will be donated to the Mr Holland’s Opus Foundation. More information on this wonderful organization can be found here: http://www.mhopus.org/

NOTE: All of, or portions of, the following four tracks from LETHAL WEAPON 3 were mastered from film stem sources (as no other elements could be located) and are of lesser sound quality than the rest of the presentation, which was mastered from pristine analog and digital WB vault materials. Disc 5: 10. Jack Kills Billy (2:08 - end), 15. Man's Best Friend / Lorna's First Fight (1:42 - 2:54), 18. Shaving. Disc 6: 14. I Can't Retire

Okay this is the coolest set all year and it's here for you...
Jeremy [HWR:OLM]
Hosted by Jeremy [Retro] at 8:53 AM