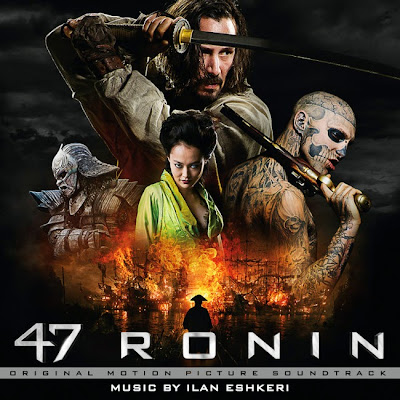 Keanu Reeves makes an explosive return to action-adventure in 47 RONIN. After a treacherous warlord kills their master and banishes their kind, 47 leaderless samurai vow to seek vengeance and restore honor to their people. Driven from their homes and dispersed across the land, this band of ronin must seek the help of Kai (Reeves) — a half-breed they once rejected — as they fight their way across a savage world of mythic beasts, shape-shifting witchcraft and wondrous terrors.As this exiled, enslaved outcast becomes their most deadly weapon, he will transform into the hero who inspires this band of outnumbered rebels to seize eternity.

Composer Ilan Eshkeri’s (Kick-Ass) epic score offers a powerful and exotic mix of cello, percussion and flute with symphony orchestra, capturing all the color, action, emotion and drama of the story.

What worries me about a film like this, isn't the score... the score somehow escapes they preying eyes of the critics. This film was not screened for review and that is the first "red flag", but again talking about the score... I enjoyed this as I do any of Ilan Eshkeri previous works.
Jeremy [HWR:OLM]
Hosted by Jeremy [Retro] at 5:03 AM

I have a feeling I would deeply enjoy this score, Jeremy