THE HOBBIT EPISODE II: THE DESOLATION OF SMAUG 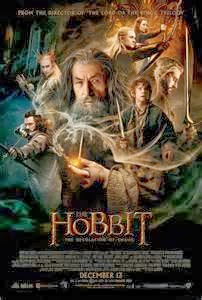 I am not one of those guys who reads books and, you know, learns new stuff.  I never claim that the book is better even though we all know nine times out of ten it is.  What I am trying to say is I don't judge a movie based on the book.  Just because the book is better doesn't mean the movie is bad just because it did something different with the source material.  I say that because I love the LORD OF THE RINGS TRILOGY.  I loved the first THE HOBBIT: AN UNEXPECTED JOURNEY.  I find little to fault.  If there is anything to fault it can be easily ignored with no sense of compromise on how I view films.  I can't say that for the over bloated, overly long for no reason other than to create another trilogy THE HOBBIT: THE DESOLATION OF SMAUG.

I complained when they took the books THE HARRY POTTER AND THE DEATHLY HOLLOWS, THE TWILIGHT BOOK 4 and now MOCKING JAY and split them into two movies.  Obviously it was to squeeze every dime out of a popular franchise that was coming to an end.  The result was a not so great HARRY POTTER movie and an even worse than usual THE TWILIGHT.  Who knows right now if THE HUNGER GAMES will add a not so great movie in their series which has been very solid so far.  I did not complain when they announced that THE HOBBIT was going to be divided into three films.  The reason for my hypocrisy is that I trusted Peter Jackson and I like the idea of movies that would no doubtfully explore and expand the world of Middle Earth.  How cool, right?  After the first HOBBIT film I was assured of another great trilogy in league with LOTR.  AN UNEXPECTED JOURNEY took its time.  It set a mood.  It had remarkable scenes that I can remember and most importantly of all it blended well into the original trilogy.  DESOLATION, however, would better fit in the STAR WARS prequels with it's heavy dependence on computer graphics and zany cartoony adventure scenes.  CLICK HERE TO CONTINUE READING.....