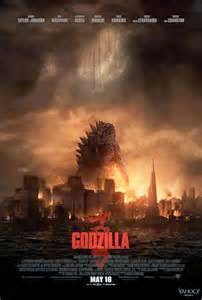 Gareth Edwards and all involved in the making of this film have given us a truly remarkable GODZILLA movie!  I am a big fan of the GODZILLA franchise so my review will be a bit too over glowing.  The past films were a part of my mental development as a young child.  Godzilla and all the monsters he fought were a source of inspiration for my wild imagination.  I colored and drew many pictures of him/her in grade school.  Often I would glue many pages of notebook paper together so I could draw him as big as I could fighting the giant Sea Monster or Ghidorah the Three-Headed Dragon from space.  There would always be planes, ships and helicopters buzzing about shooting, getting blown up or having pilots ejecting as their craft crashed into the massive beast.  Good times.  I wasn't into sports in case you were wondering.  As much as I love Godzilla I will admit that I haven't seen most of his films.  My favorite though was GODZILLA 1985.  If I remember correctly it was the first film since the original that had a more serious tone.  The death of people wasn't so easily brushed aside like most movies in the franchise.  Charred bodies were left behind in his destruction.  Buildings were no longer just mere models on a stage with a rubber suit monster stepping on them with fire crackers being shot from toy tanks at her.  The new GODZILLA is closer to that 1985 movie than any other.  I have waited a long time for a Godzilla movie like this.  CLICK HERE TO READ THE REST!!!