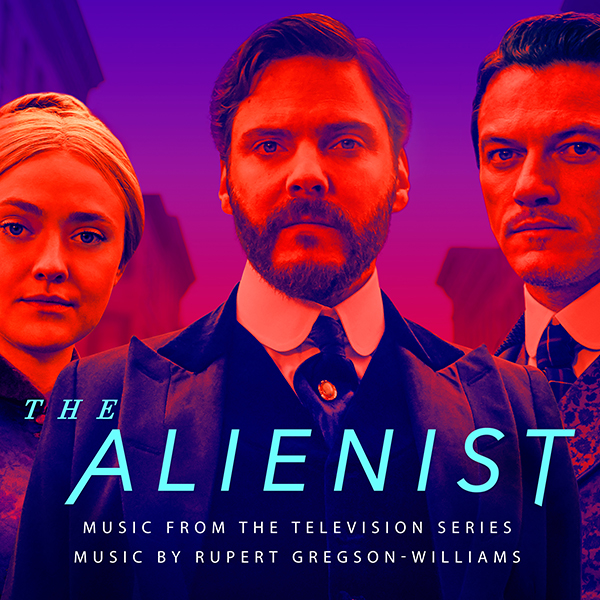 Lakeshore Records will release THE ALIENIST – Music From the Television Series digitally on February 2nd and on CD later this year. The album features original music by composer Rupert Gregson-Williams (Wonder WomAn, THE CROWN). THE ALIENIST is a co-production between Paramount Television and Turner's Studio T and premiered on Monday, Jan. 22 at 9 p.m. ET/PT across TNT platforms.

When asked about the emotional themes present in the music of THE ALIENIST, composer Gregson-Williams said. “I was excited about exploring the themes of the Alienist Laszlo Kreisler himself, because he is a character with such depth and complexity. Laszlo has an understanding of the human psyche that is pure genius, but he is also very flawed emotionally. He needs a theme that reflected that depth as it would move with him throughout the story.”

An unflinching psychological thriller set amidst the underbelly of New York City’s “Gilded Age,” THE ALIENIST follows Laszlo Kreizler (Daniel Brühl, INGLOURIOUS BASTERDS, RUSH, CAPTAIN AMERICA: CIVIL WAR), a brilliant and obsessive “Alienist” in the controversial new field of treating mental pathologies, who holds the key to hunting down a never-before-seen ritualistic killer murdering young boys.  Based on the award-winning, fan-favorite novel by Caleb Carr, with standout performances from Luke Evans (THE GIRL ON THE TRAIN) and Dakota Fanning (AMERICAN PASTORAL), THE ALIENIST is a gripping, turn-of-the-century murder mystery like none other: the story of the emergence of the world’s most powerful city that will stop at nothing to bury its darkest secrets.

In THE ALIENIST, Luke Evans plays newspaper illustrator John Moore and Dakota Fanning plays Sara Howard, an ambitious secretary determined to become the city's first female police detective. The series also stars Brian Geraghty (THE HURT LOCKER) as police commissioner Theodore Roosevelt, Douglas Smith (MISS SLOANE) and Matthew Shear (MISTRESS AMERICA) as Marcus and Lucius Isaacson, twin brothers who help unravel the disturbing mystery; Matt Lintz (PIXELS) as Stevie, a tough, young boy employed by Dr. Kreizler as a driver and errand boy; Robert Ray Wisdom (THE WIRE) as Cyrus, Kreizler's valet, a man with a dark past who has been reformed by Kreizler; and Q'orianka Kilcher (THE NEW WORLD) as Mary, Kreizler's mute maid with whom he shares a special unspoken connection.

“The first thing I worked on was a suite to represent the streets of New York,” continued Gregson-Williams. “The city was, at the turn of the twentieth century, at the forefront of scientific discovery but was also a sense of true anarchy in everything that is happening. I wanted discovery and change to ring out with every note of the music.  I played the double bass and violin throughout the score.  The double bass is so guttural and startling just like being in the city at that time.”