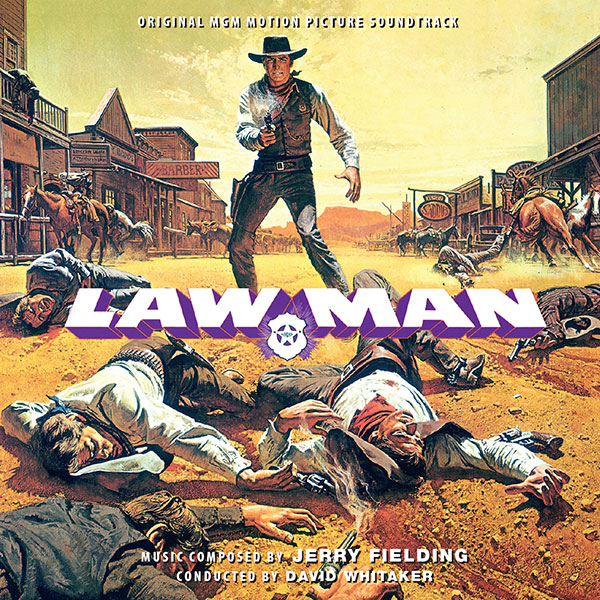 Intrada's latest release revisits one of Jerry Fielding's classic western scores – the 1971 United Artists film Lawman. Fielding's score avoids the customary western trappings, featuring a main theme that combines the scope of the great frontier with brooding intensity. Shifting between minor and major, his theme underlines the singular, unyielding pursuit by Burt Lancaster as the "Lawman" in bringing several men to justice. Reflective moments are sensitive, counterbalancing the fierce and violent action scenes. Capping the score is a powerful finish with trumpets ascending into the stratosphere.
Presented in crystal clear stereo from newly located original master elements, the release offers a different program from the previous Intrada release. In the '70s Fielding had been frustrated at the lack of interest by record companies in his music, so he had approved a 2-LP set featuring suites from four of his scores, including Lawman. This suite was used as the base for the original Intrada album, with new material added in to supplement the suite. With this new release the entire score has been remastered, and working with the unedited original cues, the score has been put in film order as is customary with most Intrada albums.

In the film, Burt Lancaster plays Sheriff Jered Maddox, a rude and arrogant fellow if there ever was one. Maddox enters a neighboring town searching for the men responsible for an accidental death. But even with justice on his side, his manner turns the town against him, and the town boss sends a series of henchman to do away with Maddox – one after another. Directed by Michael Winner, Lawman also features Robert Ryan, Lee J. Cobb, and Robert Duvall.