"JUST A STORY FROM AMERICA: A MEMOIR" by Elliott Murphy 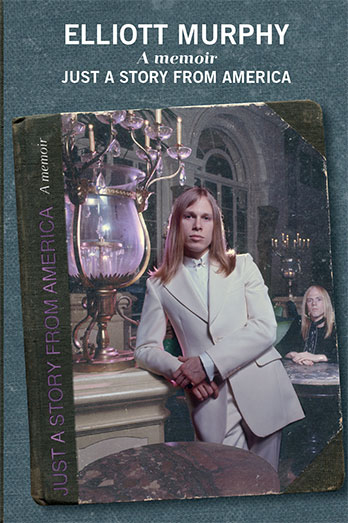 Elliott Murphy, legendary rock troubadour and a true pioneer of independent recording artists has finally published his long-awaited memoir, JUST A STORY FROM AMERICA. This rock and roll storyteller, who has been cited by artists as inspirational as Bruce Springsteen, Billy Joel and the late Lou Reed, and whose career now spans nearly five decades, was promoted by Columbia Records in 1977 with a full-page ad in Rolling Stone reading, “He could write a book, but he chose rock and roll instead.” The truth is that he has been doing both for years and in the process achieving international success and acclaim. Finally, his amazing story is told.

In 1973 posters were plastered all over New York City’s subway system proclaiming, “Elliott Murphy is going to be a monster,” when his critically-praised debut album, AQUASHOW, was first released. Perhaps his major label career didn’t take off as predicted, but his unique journey did include him becoming a rock star monster, before ultimately finding redemption in Paris, France with a thriving career, loving family and a trove of rock ‘n roll anecdotes and wisdom to fill this unforgettable and highly readable memoir.

In his honest, gripping and often humorous telling, Elliott describes a childhood of show biz affluence, the tragic loss of a famous father, a European sojourn where he encountered Federico Fellini and a love for the old world, and perhaps most provocatively, his journey through the mine-fields of rock stardom in which he fittingly calls true success in the music business as best measured in terms of survival. From the glam world of 1970’s Manhattan and fabled LA recording studios and on to what was left of swinging London before finally finding his home, love and a faithful public in Europe, Elliott Murphy’s memoir is a valuable addition to a growing essential cultural genre that now includes Bruce Springsteen’s Born to Run, Patti Smith’s Just Kids and Bob Dylan’s Chronicles.

JUST A STORY FROM AMERICA takes the reader on an insightful journey into the daunting world of the music business from the unique perspective of an internationally acclaimed artist you may never have heard of, even while songs such as Last of the Rock Stars, Drive all Night, and A Touch of Kindness travelled on radio-airwaves all around the world for decades. A moving and not often heard story told from the perspective of an artist who has gone from celebrity to anonymity and back again and lived to tell the tale.

Elliott Murphy has released over 35 albums of original music since his debut album AQUASHOW (1973) and continues to perform concerts in Europe, Japan, Canada and the USA. He stars in the upcoming feature film, BROKEN POET based upon his 1980’s short story which includes a rare cameo appearance by Bruce Springsteen and Patti Scialfa. The award winning 2016 documentary, THE SECOND ACT OF ELLIOTT MURPHY was selected for the prestigious Stony Brook Film Festival and his journalism has appeared in Rolling Stone (U.S.), Vanity Fair (France), and other international publications. He is the author of three novels, two poetry books, and numerous short-story collections.

In 2015 Elliott Murphy was awarded the Chevalier de l'Ordre des Arts et des Lettres by the French Minister of Culture and in 2018, Billy Joel inducted Elliott into the Long Island Music Hall of Fame, stating, “His songs are honest and literate and pure, and those songs have attracted audiences far beyond his country. I’ve long envied his bravery and integrity, and I’ve always admired his lyric skill.”