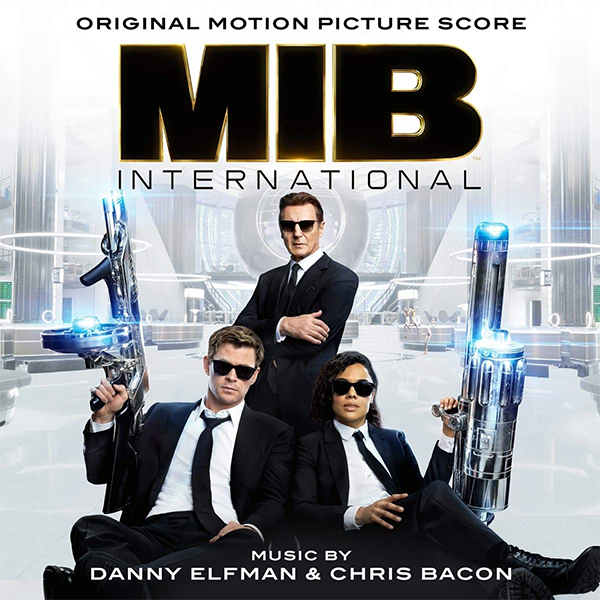 Sony Music announces the release of MEN IN BLACK™: INTERNATIONAL (ORIGINAL MOTION PICTURE SOUNDTRACK) with music by DANNY ELFMAN and CHRIS BACON.  One of the most acclaimed and distinctive film composers of his generation, Danny Elfman returns to Men in Black after scoring the franchise’s first three installments.  He is joined by Chris Bacon, who has previously written additional music on Elfman’s scores including Avengers: Age of Ultron, Alice Through the Looking Glass and Goosebumps.  Available Friday, June 7, the soundtrack features music from the hugely-anticipated summer film, which makes its theatrical debut via Sony Pictures on Friday, June 14.

Of the soundtrack, composer Danny Elfman says, “I have always loved scoring the Men in Black series.  It allows me to enter a weird quirky unique musical world that only exists in the MIB universe. Revisiting and updating is always a joy. And sharing this chapter with co-composer Chris Bacon was also a great experience. ”

The Men in Black have always protected the Earth from the scum of the universe.  In this new adventure, they tackle their biggest, most global threat to date: a mole in the Men in Black organization. Men in Black: International is directed by F. Gary Gray, and written by Art Marcum & Matt Holloway, based on the Malibu Comic by Lowell Cunningham. Produced by Walter F. Parkes and Laurie MacDonald. Executive produced by Steven Spielberg, Edward Cheng, Howard Chen, E. Bennett Walsh, Riyoko Tanaka, David Beaubaire and Barry Sonnenfeld. The film stars Chris Hemsworth, Tessa Thompson, Kumail Nanjiani, Rebecca Ferguson, Rafe Spall, Laurent Bourgeois & Larry Bourgeois, with Emma Thompson and Liam Neeson.

A native of Los Angeles, Elfman grew up loving film music. He travelled the world as a young man, absorbing its musical diversity. He helped found the band Oingo Boingo, and came to the attention of a young Tim Burton, who asked him to write the score for Pee-wee’s Big Adventure. 34 years later, the two have forged one of the most fruitful composer-director collaborations in film history. In addition to his film work, Elfman wrote the iconic theme music for the television series The Simpsons and Desperate Housewives.

Elfman has expanded his writing to composing orchestral concert works which include: Serenada Schizophrana, a symphony commissioned by the American Composer’s Orchestra, which premiered at Carnegie Hall in 2005, Rabbit and Rogue, for the American Ballet Theater choreographed by Twyla Tharp, performed at The Metropolitan Opera house in 2008, and Iris for Cirque du Soleil directed by French choreographer Philippe Decouflé.  In 2011, Danny Elfman’s Music from the Films of Tim Burton live orchestral concert, premiered at Royal Albert Hall, and has since toured around the world and won two Emmys.

“I need to push myself into new territory with fresh challenges as much as I can and whenever I can. I am told I have a recognizable style but my greatest pleasure is when I can surprise the audience with my music.”

ABOUT CHRIS BACON: Chris Bacon burst onto the film scoring scene with his full throttled score for Duncan Jones’s hit thriller Source Code. “From the point that I could start thinking about what I wanted to do when I grew up,” says Chris Bacon, “it was always to write movie music.” Having cut his teeth as a protégé—orchestrating, co-composing, and writing additional music—of James Newton Howard (on films like Gnomeo and Juliet and King Kong), Bacon made his solo debut with the score for Angels Fall and hasn’t looked back. He gave animated accompaniments to Space Chimps and Alpha and Omega, and composed the dramatic score for the war documentary High Ground produced by Don Hahn. Chris also wrote the underscore for the second half of NBC’s Smash season one, which earned him his first Emmy Award Nomination. Chris recently received his second Emmy Award Nomination on Bates Motel for best Original Dramatic Score for a Series. He has also contributed additional music to David O. Russell’s Academy Award nominated American Hustle, Marvel Studios’ Avengers: Age of Ultron, Paddington produced by David Heyman, and Sony Picture’s Goosebumps. His most recent work includes Rob Reiner’s Being Charlie, ABC’s TV drama When We Rise, the Amazon reboot The Tick directed by Wally Pfister, the Fox feature Snatched directed by Jonathan Levine, and  the Paramount animation-adventure feature, Sherlock Gnomes.

Bacon grew up in Utah, learning playing piano and saxophone before studying music composition in college. He moved to L.A. to attend USC’s film scoring program, which resulted in his apprenticeship with Howard. “It comes back to instinct,” he says of his process, “and for better or worse, following my ears.”
Jeremy [Six Strings]
Hosted by Jeremy [Retro] at 7:04 PM