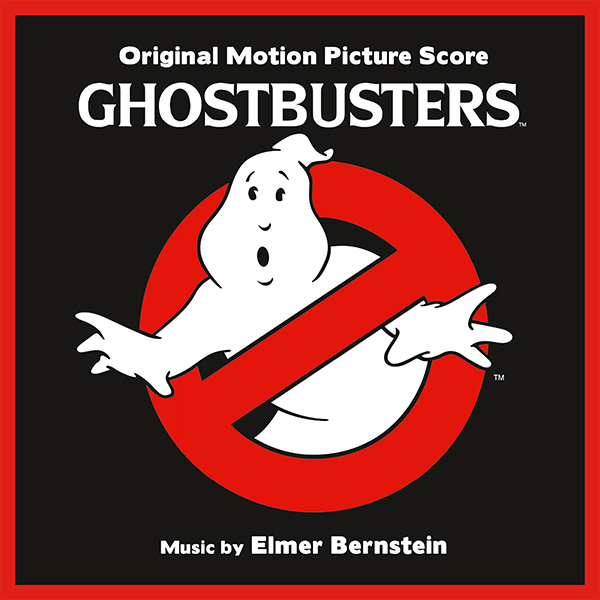 In honor of the 35th anniversary of Ghostbusters’ 1984 theatrical debut, Sony Music announces a special reissue of “GHOSTBUSTERS (ORIGINAL MOTION PICTURE SCORE)” with music by legendary film composer ELMER BERNSTEIN (The Magnificent Seven, To Kill a Mockingbird, The Age of Innocence).  Available now to preorder, the anniversary edition arrives in digital formats for the very first time (in both standard and hi resolutions) and on CD Friday, June 7 and on vinyl Friday, July 19.  The collection features music from the iconic blockbuster, newly mixed and remastered from the score’s original multi-tracks, as well as new artwork, commentary from Elmer Bernstein’s son, Peter, and four previously unreleased tracks.

Of the 35th anniversary edition, Peter Bernstein, son of the late Elmer Bernstein, says, “As one of the original orchestrators on Ghostbusters, it has been very satisfying and also very moving to work on this soundtrack release 35 years down the road. It is a great movie with great music and we had a whole lot of fun creating it. I am very pleased to see it released in its original form.”
With a star-studded cast, Ghostbusters follows four men on a mission to save the world.  Fired from university research jobs, Doctors Venkman, Stantz and Spengler set up shop as "Ghostbusters," hiring Zeddemore and, together, ridding Manhattan of bizarre apparitions. But even the spirit exterminators are severely tested when beautiful Dana Barrett and her nerdy neighbor Louis Tully become possessed by demons living in their building.

Soon every spook in the city is loose and our heroes face their supreme challenge at a rooftop demonic shrine. If you want your spirits raised, who you gonna call? Ghostbusters!


ABOUT ELMER BERNSTEIN... In the history of film music, Elmer Bernstein (1922-2004) is among the iconic and the legendary. With a career that spanned an unparalleled 5 decades, he composed more than 150 original movie scores and nearly 80 for television, creating some of the most recognizable and memorable themes in Hollywood history: the driving jazz of The Man With the Golden Arm, the rousing Western anthem of The Magnificent Seven, the lyrical and quietly moving music of To Kill a Mockingbird, and the jaunty, nose-thumbing march of The Great Escape. His impact is still felt, and his presence still missed, by moviemakers and moviegoers alike.

After a very promising start to his film-composing career, he found himself in blacklist-era political trouble due to his support for certain causes. During that period Elmer worked as a rehearsal pianist for the ballet sequences in the film version of Oklahoma!, and with Danny Kaye’s wife, Sylvia Fine, jotting down her tunes for The Court Jester at Paramount and scoring low-end cult sci-fi films. Then in one amazing year he composed the groundbreaking jazz score for The Man With the Golden Arm for director Otto Preminger and the epic score for Cecil B DeMille’s The Ten Commandments. The Golden Arm soundtrack shot to No. 2 on the Billboard album charts in 1956, becoming one of the first hit movie soundtracks. These scores catapulted Bernstein onto the “A” list of Hollywood composers and wiped out any more talk of “graylisting.” Golden Arm won him his first Oscar nomination and launched a series of jazz-oriented Bernstein scores, including Sweet Smell of Success, The Rat Race, TV’s Staccato and Walk on the Wild Side. Meanwhile, Bernstein’s close relationship with producer Alan J. Pakula and director Robert Mulligan led to one of his most memorable scores, and for one of the finest American movies ever made: To Kill a Mockingbird. The familiar classic about racial prejudice, set in a small town in the depression-ridden South, won Oscars for Gregory Peck and screenwriter Horton Foote in 1962, and a nomination for Bernstein. His understated music, composed for a chamber-sized ensemble rather than the more traditional full orchestra, quickly became a new model for film composers. Bernstein’s versatility as a composer was again demonstrated when, the very next year, he created another classic with the theme for The Great Escape, a fact-based World War II adventure film about Allied soldiers who plan an elaborate escape from a prisoner-of-war camp. It was also in the ‘60s that Bernstein produced what may have been the best of his five scores for director George Roy Hill: United Artists’ production of James Michener’s epic historical novel, Hawaii (1966). A labor of love and a personal favorite, Bernstein’s soaring, symphonic tapestry of grand proportions earned him an Oscar nomination and the Golden Globe Award. The following year he won his Oscar for the original score for Thoroughly Modern Millie.

Bernstein’s career took a surprising turn in 1978, thanks to a call from his son Peter’s old school chum, John Landis. Landis, then 27 and a film director, asked Bernstein to score his raucous college comedy Animal House starring John Belushi. “John said, ‘Well I have an idea. … How about you do a score that has nothing to do with comedy?” Almost overnight, Bernstein became Hollywood’s go-to composer for funny movies, and for the next decade he was largely typecast in that role. Airplane! came in 1980, followed over the next four years by the Saturday Night Live alumni movies, The Blues Brothers (John Belushi and Dan Aykroyd), Stripes (Bill Murray) and Ghostbusters (Dan Aykroyd and Bill Murray). For his 1983 comedy, Trading Places, starring Eddie Murphy and Dan Aykroyd, Landis talked Bernstein into crafting a classical score from Mozart’s The Marriage of Figaro, for which he would receive an Oscar nomination for Best Adaptation Score.

A few years later Elmer had re-invented himself yet again and was scoring a series of films produced or directed by Martin Scorsese. His final film score was Far From Heaven in 2002. It was also the last of his 14 Academy Award nominations.
Jeremy [Six Strings]
Hosted by Jeremy [Retro] at 7:01 PM