Paramount Music: "Dora and the Lost City of Gold" music by John Debney and Germaine Franco 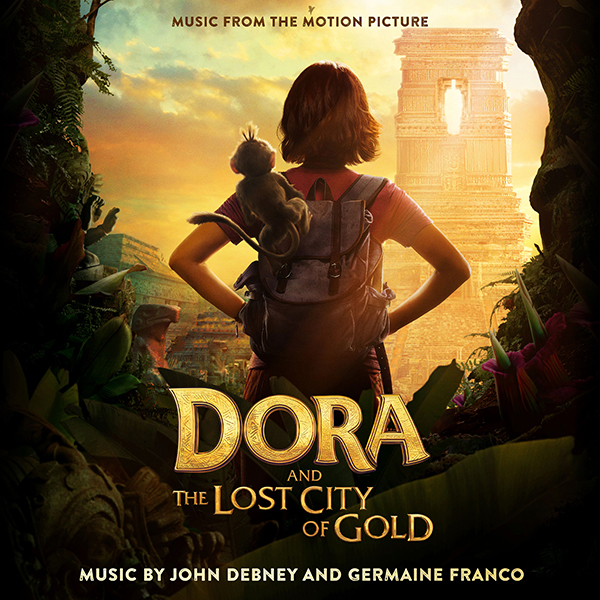 Paramount Music has released the music from the motion picture Dora and the Lost City of Gold, co-scored by John Debney and Germaine Franco. The album is now available for purchase and streaming on all digital platforms, and the film is playing in theaters nationwide.

John Debney and Germaine Franco joined forces with director James Bobin to interpret the ancient sounds of a lost Incan city, in the jungles of Peru. The duo worked with a live orchestra, choir, Latin musicians and indigenous Andean singers and musicians at the prestigious Air Studios in London.

Debney and Franco shaped their dynamic score with a variety of instruments, including a full orchestra, choir, Latin percussion, pop brass, conch shells, quenas, sikus, tarkas, toyos, cajón, charangos, and indigenous drums. Franco wrote poems in Spanish, which were translated to Quencha by scholar Américo Mendoza-Mori. The choir and Andean soloists, Phaxsi Coca and Dante Concha, are heard singing in Quenchua and playing Andean flutes in key moments of the film. The composers carefully wove the Latin music elements into the score, which represents Dora’s tenacity and courage, by collaborating with several Latin players living in London from Peru, Bolivia, Cuba, and Columbia.

“I’m excited that Paramount Music is releasing the soundtrack for Dora and the Lost City of Gold. I so enjoyed collaborating with Germaine on such an iconic and beloved character as Dora. Germaine’s musical sensibilities contributed a wonderful voice to the score.” –John Debney

“Thank you to Paramount and James Bobin for releasing the score to Dora and the Lost City of Gold. Working together with John Debney on the score for this film was very moving. John's musical voice is absolutely wondrous. I enjoyed combining our musical talents into one cohesive sound.” –Germaine Franco

About John Debney:
John Debney is the ultimate film music character actor. In equal demand for family films such as Elf, and adventure films like Iron Man, to the powerful and poignant The Passion of the Christ, for which he received an Oscar nomination for Best Original Score. Debney is an agile jack-of-all-genres, composing for comedies (Bruce Almighty), sci-fi action (Predators), horror (Dream House) and romance (Valentine’s Day) with the same confidence and panache. Debney is also known for his work in such films as Princess Diaries, Sin City, Liar Liar, Spy Kids, No Strings Attached, The Emperor’s New Groove, I Know What You Did Last Summer and Hocus Pocus. Debney’s more recent work includes Disney’s The Jungle Book directed by Jon Favreau, Fox’s Ice Age: Collision Course, directed by Mike Thurmeier, Twentieth Century Fox’s award-winning musical The Greatest Showman starring Hugh Jackman and Zac Efron and the action thriller Beirut starring Rosamund Pike and Jon Hamm. Most recent for Debney is the Warner Bros. comedy feature Isn’t It Romantic starring Rebel Wilson.  As well as Dora And The Lost City of Gold, Debney’s upcoming releases include Bleecker Street’s biopic, Brian Banks.

About Germaine Franco:
Germaine Franco is the first Latina composer invited to join the Academy of Motion Picture Arts and Sciences music branch and to receive the Annie Award for Outstanding Achievement for Music in an Animated Feature (COCO). She is the first female composer to be hired by DreamWorks Animation and Pixar. She is a Sundance Music Sound Design Fellow. At the 2018 ASCAP Screen Music Awards, Franco was recognized with the Shirley Walker Award. Univision honored Germaine Franco on International Women’s Day 2018 as one of “15 Latinas Who Are Changing The World As We Know It,” alongside Rita Moreno, and Emma Gonzalez.?

In 2018, Franco was one of three female composers to score a major studio project with her work on Tag, directed by Jeff Tomsic for New Line Cinema and Warner Bros. Additionally, she completed the feature Life-Size 2 produced by Stephanie Allain for Freeform and the TV series Vida for the Starz.

Most recently, Germaine co-composed the score for Paramount’s Dora and The Lost City of Gold live-action film with John Debney, directed by James Bobin, produced by Kristin Burr, and executive produced by Tamazin Simmonds and Eugenio Derbez. She scored the feature film Little for Universal Pictures with Tina Gordon Chism, which was released in theaters in April 2019. Her score to the upcoming animated feature for Curious George 4 directed by Doug Murphy, for Universal Animation, will be released on Hulu in September.