Hatchet...Things You May Not Know... 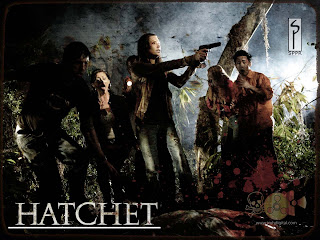 Fun facts from the production of Hatchet
• It’s all in the horror family: Hatchet special makeup effects guru John Carl Buechler – whose credits include Friday the 13th Part VII: the New Blood and A Nightmare on Elm Street 4 – got pal Kane Hodder (aka Jason Voorhees) on board by sending him Adam Green’s script.
• Adam Green met Robert Englund at a “Masters of Horror” conference, where Robert admired the Marilyn Manson Mechanical Animals Tour concert T-shirt the writer/director was wearing. Green went home, purchased the shirt online for $78 and sent it to Englund with the script. Englund called several days later to say he was game for a cameo.
• Green played an extra in Eden Formula, directed by John Carl Buechler and starring Tony (Candyman) Todd. Green was a dead security guard who spent the entire day sprawled at Todd’s feet. Todd has a cameo in Hatchet, playing a strange New Orleans voodoo shop owner.
• The genesis of Victor Crowley comes from Adam’s summer camp days, when counselors warned the kids to behave or “Hatchetface” would come and terrorize them. When the counselors were short on specifics as to how Hatchetface would torment them, Green filled in the details and told his campmates the story. He got in trouble for scaring the kids, his parents were called, and he was almost sent home.
• Longtime mentor and pal Dee Snider, of the famed 1980s band Twisted Sister, walked Green down the red carpet at the premiere of Hatchet at the 2006 Tribeca Film Fest. Adam had been sitting in a nearby pizza shop with his girlfriend, too shy to run the paparazzi gauntlet. Snider and Green first hooked up when the writer/director was in grade school – he wrote a fan letter that blossomed into a lifelong correspondence.
• In order to prevent snoops from wandering around the set, the code name for Hatchet on the crew direction signs was “Love Rodeo.”
• The climatic fight between Victor Crowley (Hodder) and Marcus (Deon Richmond) appears to occur in a cemetery; in reality, it was four cardboard cutouts of mausoleums. If you look carefully during the battle, one of the mausoleums teeters noticeably when Crowley slams Marcus into it.
• No computer graphics were used in the film; all special effects are done in-camera, via makeup, prosthetics and old-fashioned Hollywood “magic.”
• Victor Crowley’s makeup took between one and a half and three hours to complete.
• Green’s girlfriend, Rileah Vanderbilt, plays the hideously deformed Victor Crowley as a child. In real life, she’s a model and make-up artist.
• Green was worried that using a belt sander as Victor Crowley’s weapon of choice pushed the boundaries of realism – after all, where would he plug it in? Green asked the production designers to come up with a gas-powered belt sander. They did – taking three days to create.
• It took three attempts to set up the scene where Victor Crowley house burned: the first was deemed too close to an oak tree by the fire marshal; the second time, the house was set up in a parking lot but was moved when Rob Zombie needed the lot for his movie’s base camp; the third time the inferno went off without a hitch.
• Tamara Feldman (Marybeth) paints watercolors with Marilyn Manson, paving the way for Hatchet to use his song “This is the New Sh%t” in the movie.
• All vomit in the swamp monster scenes is real. Hodder, a true pro, can vomit on command, and Joel David Moore (Ben) was primed with a mixture of orange juice and clam chowder.
• Victor Crowley’s ghoulish drool is a blend of KY Jelly and Mountain Dew.
• The crew T-shirts – seen briefly in the voodoo shop scene at the start of the time – have been bootlegged and sold on the Internet since Hatchet made the festival rounds. How to tell if you have an authentic shirt? In the real ones, cemetery is spelled wrong – as “cemetary” and the skulls have a little hatchet mark on their faces.
• The Newbury Comics T-shirt worn by Moore throughout the film is a shoutout to Green’s favorite comic book chain in New England, where he bought all his horror movies and action figures while growing up.
Hosted by Unknown at 7:23 AM

Email ThisBlogThis!Share to TwitterShare to FacebookShare to Pinterest
Labels: anyone?, Desktop

That's a fun list! I haven't even seen the first Hatchet, I need to get on it :D

i don't know if it is common knowledge, but the movie company sent me the info... to good to not post... it is a crazy film...