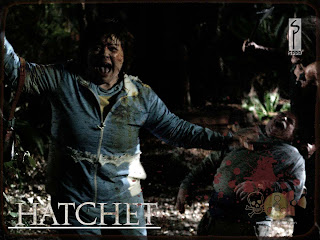 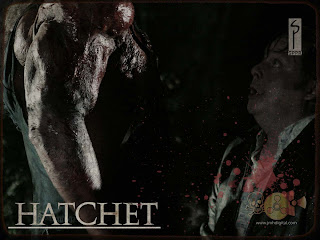 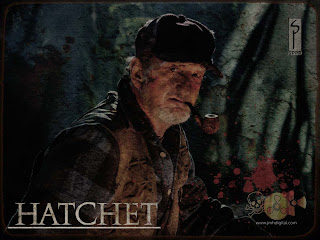 Adam Green’s Hatchet is a return to the good ol’ days of horror, when scares weren’t computer generated, when gallons of fake blood were splashed on trees, when men were men (until things got scary, at which point they squealed like little girls), women were scantily clad, and boys were deformed psychopaths with a taste for unique weaponry. It’s Mardi Gras in New Orleans, and Ben (Joel David Moore) has reached booze and boobs overload. Recently dumped and pining after his girlfriend, he enlists his pal Marcus (Deon Richmond) to accompany him on a swamp tour in a boat that travels the spooky murk surrounding the city. Marcus is less than enthused until the crew of the low, low, low (low) budget movie “Bayou Beavers” signs on, including amateur cameraman Shapiro (Joel Murray), pneumatic Misty (Mercedes McNab) and ditzy Jenna (Joleigh Fioreavanti). Joining them on the rickety cruiser are the painfully wholesome couple Mr. and Mrs. Permatteo (Richard Riehle and Patrika Darbo) and the beautiful-but-sullen Marybeth (Tamara Feldman).
Hosted by Unknown at 7:16 AM