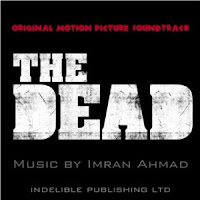 
Music from independent zombie road hit movie The Dead, starring Rob Freeman (Saving Private Ryan, Prozac Nation, Smallville), is now available as a digital album for download via iTunes and Amazon. Written by London-based composer Imran Ahmad, the score is an eerie and mesmerizing listening experience that complements director Howard J. Ford and Jon Ford’s inventive imagery perfectly. Adding a unique timbre to the soundtrack is featured Eritrean vocalist Saba Tewelde and kora performances by Gambian virtuoso Jally Kebba Susso.
Said the composer: “The music intends to reflect the beauty of the natural world turning into a twisted and distorted reality. I hope the listener is able to share the journey across rural Africa that is portrayed in the film.” Howard J. Ford commented on the release of the soundtrack: ”We were absolutely blown away by Imran’s unique and moving score for The Dead. We simply had to release it because of the sheer number of people asking where they could get their hands on the soundtrack.”
The Dead was released on DVD and blu-ray in the USA on February 14, 2012, and went straight to the #1 slot on the blu-ray charts for horror on Amazon.com. The Dead is the first zombie road movie set against the spectacular vistas of Africa. Its physically demanding emotional journey announces the arrival of the Ford Brothers on the global genre scene. Shot on location in Burkina Faso, West Africa, and Ghana, by the award-winning Ford Brothers, The Dead is the ultimate Living Dead movie.
Composer Imran Ahmad is a British-Indian Film Composer and Music Producer based in London, U.K. His music has been broadcast on UK and international television (BBC, Channel 4) and commercially released worldwide (UK, USA & Japan). Apart from The Dead, he has also composed music for several documentaries, notably multi-award winning Mayomi which is an intimate portrait of a young woman's struggle in post-tsunami Sri Lanka. Imran is co-director of 4Dio, a Transmedia publishing company creating "audio movies" - produced with professional actor performances, film music and sound design.
For a mini documentary on the making of the music for The Dead, please visit YouTube 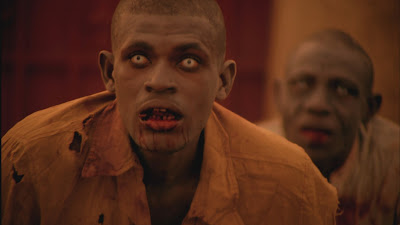 http://the-dead-movie.com
Who doesn't love a good zombie score, now wrap that up in a film the temperature reaches 115 in the shade... all I can say is run there is something following you. I am digging this score, I am not to familiar with Imran Ahmad's work, but I am going to be... soon. It's a scary film, which means a spooky score and it is a spooky score. Meant to spook you, as it does successfully... you can listen to some samples, then get it from the places below.
-Jeremy [Two Thumbs]
Hosted by Unknown at 1:01 AM