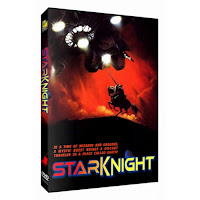 In a time of wizards and dragons, a mystic quest brings a distant traveler to a place called Earth!

It is the dark ages. Knights patrol the countryside, Kings make the rules, and princesses go silently about their royal duties. Princesses, that is, who aren't Princess Alba (Maria Lamor). When Princess Alba is apparently abducted by a dragon, it's up to Klever (Harvey Keitel) to save her. What Klever finds, however, is not a dragon at all - but a strange beast-like craft from the stars - a craft with an occupant, a humanoid alien from another planet. Things heat up when, during Princess Alba's rescue, Klever gets closer to the alien than he ever expected - and learns that Alba isn't being held against her will after all - she is in love with the strange, futuristic traveler.

Had to look it up - it's not even on the IMDB, but found it on Amazon. That's a lot of name actors for a movie I've never even heard of.