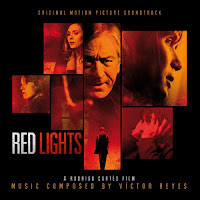 Some secrets must be seen to be believed…Red Lights follows a psychologist (Sigourney Weaver) and her assistant a physicist (Cillian Murphy) whose studies debunking paranormal activity lead them to investigate a world-renowned psychic (Robert De Niro).   The edge-of-your-seat thriller debuted at the Sundance Film Festival and immediately picked up distribution.
01. Main Titles
02. Hocus Pocus
03. Too Much Light
04. You Know Palladino From Before?
05. Lost Lonely Woman
06. Hello?
07. He Made Me Doubt
08. What's Going On? / Whatever It Takes
09. Stand Up!
10. I Wasn't With Her
11. Come On, Come On...
12. I Just Need To Know
13. 2:00 AM
14. Open Your Eyes
15. Concentrate, Ben!
16. Umbrellas
17. What Is It You've Come To See?
18. It's A Code
19. ... And Then You Wake Up
20. Dear Margaret
21. End Credits


Paranormal films are popping up by the dozen with the success of recent films and Hollywood is cashing in on this latest film "Red Lights". What would this make this different is the star power and the composed score by Victor Reyes. Virtually an unknown composer to American audiences, but very well known internationally for his music contributions.  It is meant to haunt your brain, give you a chill... well it does and does it well. Moving beats and jarring jolts from track to track it does not take long before you find yourself alone in a house looking for the light.
-Jeremy [Two Thumbs]