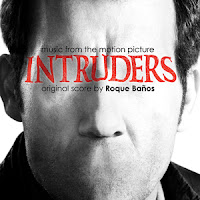 
Director Juan Carlos Fresnadillo, who impressed a lot of people by making a helluva good sequel with 28 WEEKS LATER, is coming back to scare us with the Clive Owen-starrer INTRUDERS.
Millennium Films will open INTRUDERS in limited theatrical release March 30, 2012. Scripted by Nicolás Casariego and Jaime Marques, the movie also stars BLACK DEATH’s Carice van Houten, Daniel Brühl, Kerry Fox, Pilar López de Ayala, Ella Purnell and Izán Corchero in a story that’s actually two parallel sagas of a young boy and girl in different time periods who are haunted by the same supernatural figure. The poster below is for the movie’s Italian release next month; look for an extensive chat with Fresnadillo about INTRUDERS in a future issue of Fango.

The eerie and suspenseful music is by the young and talented composer Roque Baños. Baños is a rising star in the soundtrack world who brings a new and very personal sound to the mix. He surprised experts and fans alike last year with his daring score to "LAST CIRCUS".
01. SHADOW MONSTER
02. JUAN’S NIGHTMARE
03. INTRUDERS TITLES
04. WAKING UP HOLLOWFACE
05. JOHN’S FAMILY
06. THE WORKER ACCIDENT
07. ENTERING THE STORY
08. ROLLING BOY
09. HOLLOWFACE IN MIA’S ROOM
10. BACK TO THE HOUSE
11. SECOND ATTACK
12. THE EXORCISM
13. LEAVING HOME
14. MIA’S NOTES
15. IN THE FARM
16. DISCOVERING THE TRUTH
17. IT’S OVER
18. END CREDITS
First I wanted to thank Milan Records for being the newest supporter here on this site, wanted to thank you for being out here with some wonderful scores... Like this one "Intruders" by Roque Baños. It might be ghosts, it might be monsters... it's a true piece of work. Even though the images for this film make it a horror-like journey, we are meant to enjoy the score. It invokes some fright, but hinders on classical, I have enjoyed Roque Baños work since "The Machinist" and now get real happy when I see his name attached to a project.
-Jeremy [Two Thumbs]