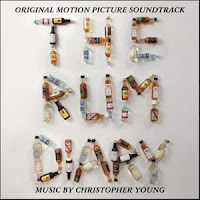 
Tiring of the noise and madness of New York and the crushing conventions of late Eisenhower-era America, journalist Paul Kemp travels to the pristine island of Puerto Rico to write for a local newspaper, The San Juan Star, run by downtrodden editor Lotterman. Adopting the rum-soaked life of the island, Paul soon becomes obsessed with Chenault, the wildly attractive Connecticut-born fiancée of Sanderson. Sanderson, a businessman involved in shady property development deals, is one of a growing number of American entrepreneurs who are determined to convert Puerto Rico into a capitalist paradise in service of the wealthy. When Kemp is recruited by Sanderson to write favorably about his latest unsavory scheme, the journalist is presented with a choice: to use his words for the corrupt businessmen's financial benefit, or use them to take the bastards down.
01. Volare (Nel Blu Di Pinto Di Blu)- Dean Martin
02. Rum Diary
03. Suckfish and Snake
04. Mother of Balls
05. Chenault
06. Flagged Me Smiling
07. Pink Jelly Remains
08. Rockin' On Rooster (With My Dead Monkey's Mother)
09. Sweat Bee
10. Cock-of-the-Rock
11. Black Note Blues
12. My Car the Cockroach
13. Neon Popsicles
14. Hefti-Tefti
15. He Must Be a Sadist
16. Puerto Rican Piss-Off
17. Whacking a Salesman
18. The Biggest Crook In New Jersey
19. Desperate Drunks and Postcard Loons
20. The Mermaid Song (Instrumental) - Johnny Depp
21. What About El Monstruo? - JD Band
22. Roll Out the Roosters - JD Band
23. Kemp In the Village - Johnny Depp, JJ Holiday
24. The Mermaid Song - Patti Smith


Here we have a different style for Christopher Young as here he shows that his talents rise above the rim of the glass. It is a very tasteful telling of a man's adventure into a very dark place, telling in an jazzy twang sort of way. There is also a few bonus treats from star Johnny Depp, which adds a smile of sadness and cheery feel... what does that all mean?
-Jeremy [Two Thumbs]