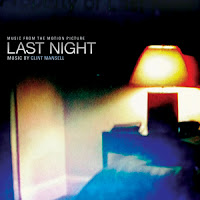 
Joanna accuses her husband, Michael, of being attracted to his co-worker. Wanting to make-up before he goes on a business trip, she assumes she over-reacted. But when they are both away from each other for one night, Michael ends up testing his loyalty to Joanna and his attraction to Laura. And Joanna tests her honesty to Michael when her ex-boyfriend Alex suddenly appears in New York for the day.
1. FIRST MOVEMENT
2. PILLOW TALKING
3. STREETS OF NEW YORK
4. EMOTIONAL CONNECTIONS
5. DANGEROUS TERRITORY
6. PHYSICAL LIAISON
7. FINAL MOVEMENT (FEAT. "NOT AT HOME")
VOCALS BY PETER BRODERICK


So this is one of those types of films, where you want to play in water... though not in your own pond. Clint Mansell captures the the mood in this very strong influenced piano piece score, you can hear the sadness and find the joy in the music. He is turning into quite the independent film go to composer from his recent work on "The Wrestler" to "Black Swan"
-Jeremy [Two Thumbs]
-----------------------------------
Hosted by Unknown at 2:01 AM