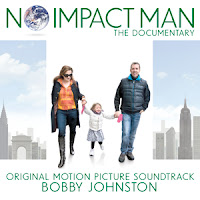 
Author Colin Beavan, in research for his next book, began the No Impact Project in November 2006. A newly self-proclaimed environmentalist who could no long avoid pointing the finger at himself, Colin leaves behind his liberal complacency for a vow to make as little environmental impact as possible for one year. No more automated transportation, no more electricity, no more non-local food, no more material consumption...no problem. That is, until his espresso-guzzling, retail-worshipping wife Michelle and their two year-old daughter are dragged into the fray.
What began as one man’s environmental experiment quickly becomes an experiment in how much one woman is willing to sacrifice for her husband’s dreams. Laura Gabbert and Justin Schein’s film provides both a front row seat into the experiment that became a national fascination and media sensation, and a behind the scenes look at the marital challenges that result from Colin’s and Michelle’s radical lifestyle change.
Johnston’s approach to composing utilizes organic and acoustic instruments, which he often plays himself.  This concept matched perfectly with the Beavan’s journey as documented in this film  Johnston described, “When [directors] Laura [Gabbert] and Justin [Schein] were in my studio we began to notice that many of the instruments seemed to match the low impact spirit of the film. There are bottles, metal scrap pieces, found and repaired items. Very few of my instruments were bought new. Many are beat-up, cheapies; some were donated by friends who never used them.”
4/5 Subtle tones for this documentary... very happy!
-Jeremy [Retro-Zombie]
Hosted by Unknown at 12:02 AM