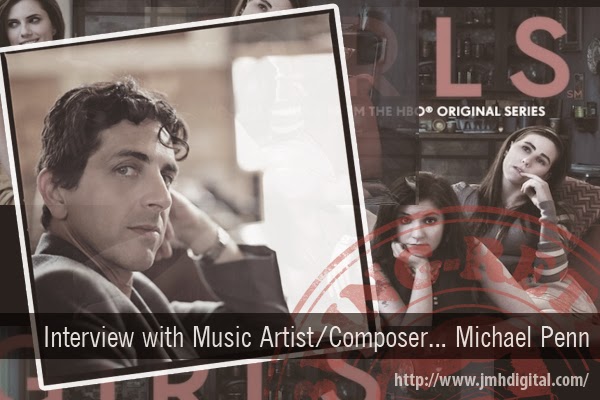 Starting a new series of interviews, not sure what to call it... they are more direct to the person's current project and I have some great interviews coming. Let's start of with someone well-known and not only a composer, but a great talented musical artist "Michael Penn"... Yes I said Michael Penn, I wanted to thank him for the time, thank you!
Jeremy [HWR:OLM]


HWR:OLM: Tell us about your current project "HBO'S: Girls" and how did you become involved in it?

MICHAEL PENN: I got a call about a young film maker named Lena Dunham who was about to start a new show for HBO.  She had done an indi feature (Tiny Furniture) that got a lot of attention. She knew of my film scores and wanted me to do the music for her show. I watched her film and knew immediately that I would love to be involved. This was the first TV I had done and the people behind Masters Of Sex had seen Girls and thought I'd be right for their show as well.

HWR:OLM: Being involved in the world of music from song to scoring, where do you find you like to do more?

MICHAEL PENN: They are very different. and yet for me one can inform the other. I like them both. Songwriting is a very personal expression and scoring is more collaborative. Both rewarding.

MICHAEL PENN: What is a typical day for you, how does it start?

It was Paul Thomas Anderson who would lure Penn into film and television composing first with 1996’s HARD EIGHT and then with the 1998 film BOOGIE NIGHTS.  Penn continued to be an independent film darling with his heartbreakingly honest scores to THE LAST KISS, Nanette Burnstein’s Sundance hit AMERICAN TEEN, SUNSHINE CLEANING (starring Amy Adams), THAT EVENING SUN (starring Hal Holbrook), THE COMEDIANS OF COMEDY (starring Patten Oswalt and Zach Galifianakis), and SOLITARY MAN (starring Michael Douglas).

In 2012 Pen was asked Penn was asked by Lena Dunham to score her HBO series GIRLS.  The show features not only original score but the occasional song by Penn, including “Good Girl Down,” which closed the 2014 third season of the series.  The song was called by Tim Molloy (TheWrap.com) “classic Penn: an intense build, a gorgeous release, and lyrics filled with wry twists worthy of Lennon-McCartney.”

The fall of 2013 saw the launch of the new series MASTERS OF SEX, a period piece about the real-life pioneers of the science of human sexuality, Masters and Johnson.  The show was nominated for Best Drama Series at the 2013 Golden Globes and is sure to be recognized at the 2014 Emmys. Penn’s original score features samples of period-accurate technology of the day including the Novachord.

Up next for Michael is the second season of MASTERS OF SEX, set to debut in July 2014, and the fourth season of GIRLS.
Hosted by Jeremy [Retro] at 12:30 AM