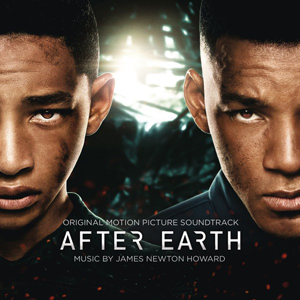 
A crash landing leaves teenager Kitai Raige (Jaden Smith) and his legendary father Cypher (Will Smith) stranded on Earth, 1,000 years after cataclysmic events forced humanity’s escape. With Cypher critically injured, Kitai must embark on a perilous journey to signal for help, facing uncharted terrain, evolved animal species that now rule the planet, and an unstoppable alien creature that escaped during the crash. Father and son must learn to work together and trust one another if they want any chance of returning home.

Side-note: Howard has scored all of M. Night Shyamalan’s films since their first collaboration on The Sixth Sense in 1999. His versatility as a composer is apparent in AFTER EARTH, which contains adventure and action scenes, along with moving passages in a family drama, and an atmospheric universe of primal sounds that drive home the meaning of humanity’s eviction from, and eventual return to, planet Earth.

4/5 Now I am a fan of James Newton Howard, he doesn't let us down... though this score was okay it has some great tracks. I know everyone is bashing the film for it's lack of substance and I am sure other things, but I am lucky enough not having to talk about the film... just the score. So for a fan of scores, I feel I can safely say, there are a few good things to take away from this... it might only be the surviving item in 1,000 years?

I watched the clip called "Canopy" and it had an almost tribal feel with the percussion instruments. He's good, so I can see why M. Night uses him.