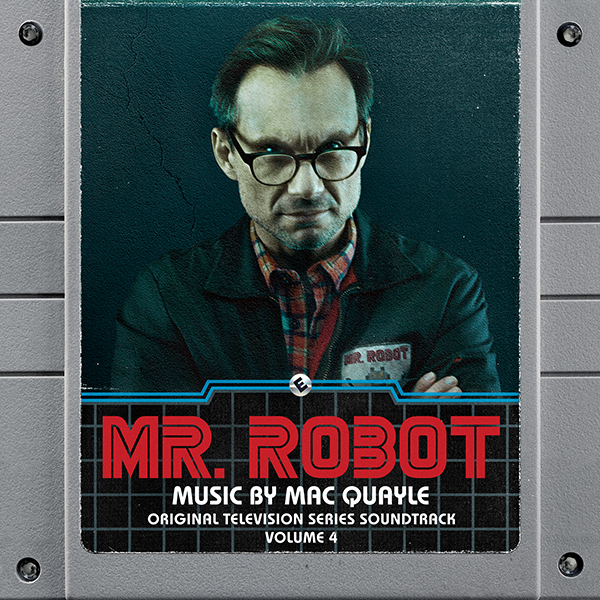 Lakeshore Records will release the second of two volumes of music from the second season of the EMMY® and Golden Globe® Award-Winning USA Network series MR. ROBOT. The MR. ROBOT V.4 soundtrack features original music by Mac Quayle (Feud: Bette And Joan, American Horror Story).  Volume 4 will be released digitally and on CD October 13th. Later this year, Invada Records, in partnership with Lakeshore Records, will release the Volume 4 soundtrack on LP.

"If the first season of MR. ROBOT took us into Elliot’s mind, the second season drew us deeper into his subconscious,” said Quayle. “As we learned, it’s pretty dark in there and so naturally the music followed suit. Darker, weirder, more dissonant, more paranoid.”

“It’s quite possibly some of the strangest music I’ve ever written,” Quayle described. “I brought Elliot’s theme back from season one but in a much more subtle and obscure form. In addition, I expanded the electronic instrument palette with the use of orchestral style strings to add another layer of emotion to certain scenes.”

Audiences worldwide have been captivated by the unique musical stylings of EMMY-winning and Grammy-nominated composer Mac. He currently scores the suspense-thriller Mr. Robot for which he won an EMMY.

Most recently, Mac received two EMMY nominations for his main title and score for his music in Ryan Murphy’s hit series, FX’s Feud: Bette and Joan, starring Jessica Lange and Susan Sarandon, about the notorious rivalry between Bette Davis and Joan Crawford on the set of the 1962 cult classic thriller, What Ever Happened to Baby Jane. Additionally, he received his second consecutive World Soundtrack Award nomination for his work on Feud: Bette and Joan, Mr. Robot and Scream Queens, starring Emma Roberts and Jamie Lee Curtis.


Quayle has written music for over 40 films and television shows and has accumulated a long list of credits as a music producer, dance re-mixer, and multi-instrumentalist. His music can also be heard on a diverse list of feature films and documentaries. His music for the documentary Autism in Love premiered at the 2015 Tribeca Film Festival, and indie thriller LA Slasher, starring Mischa Barton premiered at the New York City International Film Festival.

“To round out the sound I created some beat-driven electro tracks that had me jumping around the studio during the composing process,” concluded Quayle. “Once it was all done, it became clear to me that the Mr. Robot rabbit hole goes way deeper than I ever imagined.”