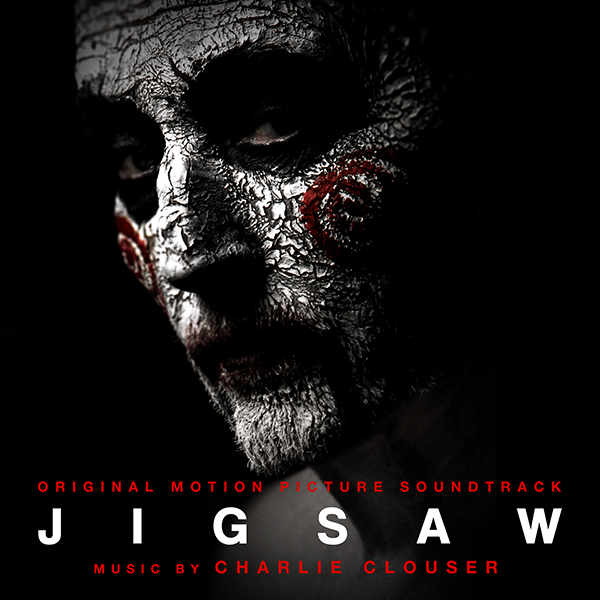 “For JIGSAW I actually started working on the score by concentrating on the end of the film, because there would need to be two thematic cues that came before the obligatory re-interpretation of ‘Hello Zepp,’” described Clouser, the composer of the previous seven films in the SAW franchise. “Each film has its own musical vocabulary that is grafted onto the established tonal framework, and there are certain chord progressions, subtle melodies, and trademark sounds that helped to give that sense of continuity across the whole franchise.”

This October 27, Lionsgate and Twisted Pictures proudly present JIGSAW! After a series of murders bearing all the markings of the Jigsaw killer, law enforcement find themselves chasing the ghost of a man dead for over a decade and embroiled in a new game that’s only just begun. Is John Kramer back from the dead to remind the world to be grateful for the gift of life? Or is this a trap set by a killer with designs of their own?

“There’s a builder of experimental musical instruments named Chas Smith that I’ve worked with since the first SAW film, although in the past I’ve always gone to his studio to record because most of his instruments are permanently installed and far too bulky to be moved,” Clouser explained. “When I was just beginning work on JIGSAW, Chas was preparing to move his studio for the first time in more than thirty years, and I was able to convince him to finally sell me one of the instruments that I’ve used on all of the SAW scores! This instrument, called Que Lastas, has a large sheet of stainless steel with piano strings and metal rods attached. It is played with a cello bow to create scary tones that are often dissonant but always ominous. It’s become an important part of my sonic palette for the SAW films, and I’m so happy to have been able to finally bring it home.”

In addition to the Que Lastas, Clouser “also used a Chinese ghuzheng, played with a bow to create shuddering patterns that create a sense of nervous tension, as well as a pedal steel guitar that I play with an e-bow to create more ominous drone-like tones. Besides all of these weird acoustic sources, I also used my collection of modular synthesizers and circuit-bent toy instruments for many of the more aggressive electronic sounds, and of course there were plenty of heavy, hard industrial metal guitar sounds in there as well.”