Sony Classical: "THANK YOU FOR YOUR SERVICE" Music by Thomas Newman 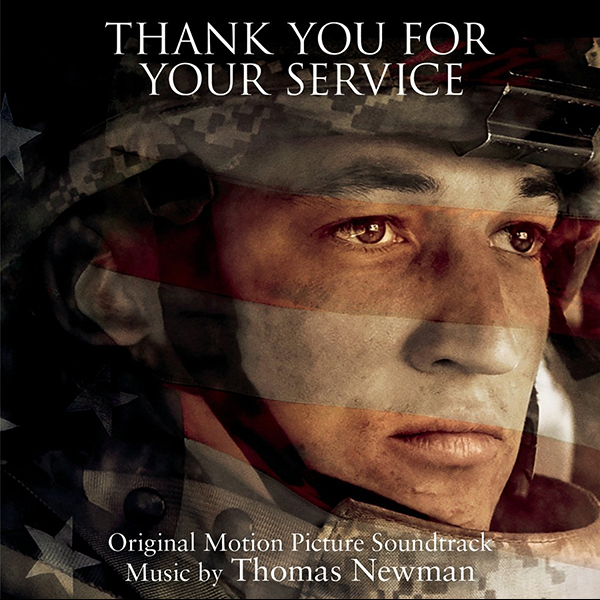 Sony Classical proudly announces the release of Thank You For Your Service (Original Motion Picture Soundtrack) with music by Grammy® Winner and Oscar® nominated composer Thomas Newman (Bridges of Spies, Skyfall, American Beauty, Finding Nemo, The Shawshank Redemption).  The soundtrack will be released digitally on October 27th and on CD November 3. Thank You For Your Service opens in U.S. theaters on October 27th.

DreamWorks Pictures' Thank You for Your Service follows a group of U.S. soldiers returning from Iraq who struggle to integrate back into family and civilian life, while living with the memory of a war that threatens to destroy them long after they've left the battlefield. Starring an ensemble cast led by Miles Teller, Haley Bennett, Joe Cole, Amy Schumer, Beulah Koale, Scott Haze, Keisha Castle-Hughes, Brad Beyer, Omar J. Dorsey and Jayson Warner Smith, the drama is based on the bestselling book by Pulitzer Prize-winning reporter and author David Finkel. Jason Hall, who wrote the screenplay of American Sniper, makes his directorial debut with Thank You for Your Service and also serves as its screenwriter. Jon Kilik (The Hunger Games series, Babel) produces the film, while Ann Ruark (Biutiful) and Jane Evans (Sin City) executive produce.

Thomas Newman is an American composer and is widely acclaimed as one of today’s most prominent composers for film, having scored more than 80 film and television projects, earning 14 Oscar nominations and 6 Grammy Awards. Born in Los Angeles, his father was notable film composer Alfred Newman (1900-1970).   He studied composition and orchestration at USC, and completed his academic work at Yale University.  He early mentors included the noted film composer David Raksin, and legendary Broadway composer Stephen Sondheim.

A turning point in Newman’s career took place while he was working as a musical assistant on the 1984 film Reckless, for which he ultimately was promoted to the position of composer.  Since then, he has contributed distinctive and evocative scores to numerous acclaimed films including Desperately Seeking Susan, The Lost Boys, The Rapture, Fried Green Tomatoes, The Player, Scent of a Woman, Flesh and Bone, The Shawshank Redemption, Little Women, American Buffalo, The People Vs. Larry Flynt, Oscar and Lucinda, The Horse Whisperer, Meet Joe Black, American Beauty, The Green Mile, Erin Brockovich, In The Bedroom, Road to Perdition, Finding Nemo, Lemony Snicket’s A Series of Unfortunate Events, Cinderella Man, Jarhead, Little Children, The Good German, Revolutionary Road and Wall-E. His most recent projects include The Debt, The Adjustment Bureau, The Help, The Iron Lady, The Best Exotic Marigold Hotel, Skyfall, Spectre, Side Effects, Saving Mr. Banks, The Judge, Finding Dory, Passengers and Steven Spielberg’s Bridge of Spies.  Newman also composed the music for HBO’s acclaimed 6-hour miniseries Angels in America directed by Mike Nichols. He received an Emmy Award for his theme for the HBO original series Six Feet Under.