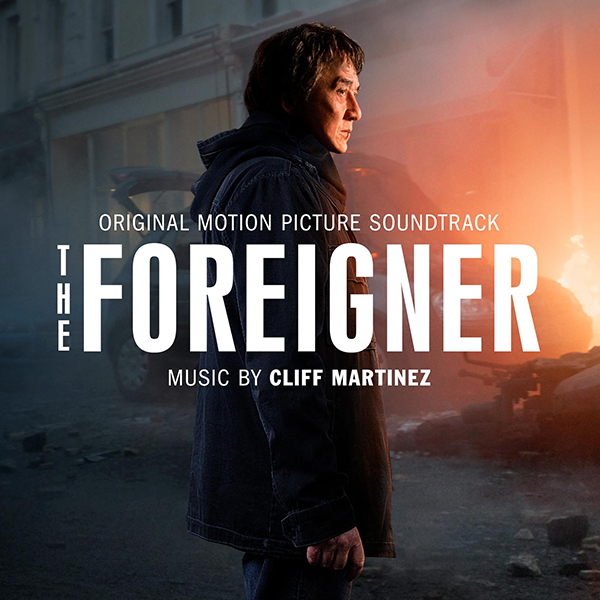 Sony Music proudly announces the release of THE FOREIGNER (Original Motion Picture Soundtrack) with the music by Grammy® nominated composer Cliff Martinez (Drive, TV’s The Knick).  The soundtrack will be released digitally and on CD on October 13th, 2017. THE FOREIGNER from STXfilms opens in U.S. theaters the same day.

“This is a unique score for me - my first time doing a score for a nonstop action film,” said Martinez. “Director Martin Campbell trusted me and left me alone to do what I do best.  The music is all electronics with a couple of hardware synthesizers - it’s really dark and tense.”

THE FOREIGNER, starring Jackie Chan and Pierce Brosnan, is a timely action thriller from director Martin Campbell, about a humble London businessman Quan (Jackie Chan), whose long-buried past erupts in a revenge-fueled vendetta when the only person left for him to love - his teenage daughter - is taken from him in a senseless act of politically-motivated terrorism. In his relentless search for the identity of the terrorists, Quan is forced into a cat-and-mouse conflict with a British government official (Pierce Brosnan), whose own past may hold clues to the identities of the elusive killers.

Martinez added, “There’s a recurring theme in the film where Jackie [Chan] keeps wiping the floor with these young bodyguards and keeps saying, in essence, ‘I can’t believe you guys can’t handle an old man’.  I found out that Jackie and I are only a few months apart in age.  I hope you young guys can handle us old men!”

Cliff Martinez, who was born in the Bronx but raised in Ohio, moved to California in 1976 landing in the middle of the punk movement.  After stints as the drummer for the Weirdos, Lydia Lunch and Foetus frontman Jim Thirlwell, and the final incarnation of Captain Beefheart and the Magic Band, Martinez joined the Red Hot Chili Peppers (playing on the band’s first two albums) and later the Dickies.  It was during his tenure with the Chili Peppers that Cliff began exploring the new technologies of that era, which would eventually guide him towards the film music world.

A tape Martinez had put together using these new technologies made its rounds, leading him to score an episode of Pee-Wee’s Playhouse. The same recording also ended up in Steven Soderbergh’s hands and Martinez was hired to score the famed director’s first theatrical release 1989’s sex, lies, and videotape.  Martinez’s longstanding relationship with Soderbergh has continued through the years and they have worked together on ten theatrical releases including Kafka, The Limey, Traffic, Solaris, Contagion and the critically acclaimed TV series The Knick.

Perhaps it is because of his time in the punk scene that Martinez’s approach to scoring is nontraditional.  His scores tend towards being stark and sparse, utilizing a modern tonal palette to paint the backdrop for films that are often dark, psychological stories like Pump Up the Volume (1990), The Limey (2009) Wonderland (2003), Wicker Park (2004), and Drive (2011).  Martinez has been nominated for a Grammy Award (Steven Soderbergh’s Traffic), a Cesar Award (Xavier Giannoli’s A L’origine), and a Broadcast Film Critics Award (Drive).  His score for The Neon Demon was awarded Best Soundtrack at the 2016 Cannes International Film Festival.

Still the drummer at heart, Martinez’s use of audio manipulations, particularly for percussive sounds, has been evolving through the years and is evident by the hammered dulcimer of Kafka (1991), the gray-areas between sound design and score for Traffic (2000), the steel drums and textures of Solaris (2002), what Martinez called ‘rhythmi-tizing pitched, ambient textures’ of Narc (2002), and ‘using percussion performances to trigger and shape the rhythmic and tonal characteristics of those ambient textures,’ as he described his score for 2011’s The Lincoln Lawyer.

Won't see it in the theater, but do want to see this one eventually.