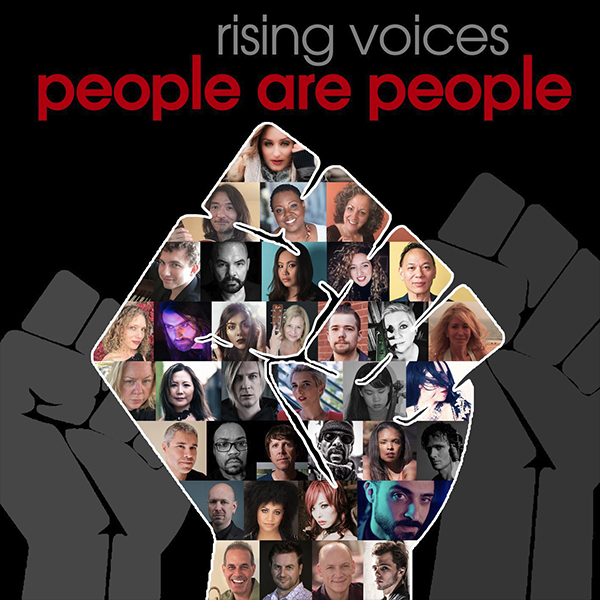 Rising Voices, a collective of over 30 musicians, announces the release of their cover and music video of People Are People in support of the NAACP Empowerment Program, the Southern Poverty Law Center, and HeadCount.org. All proceeds will be donated to these organizations. Inspired to rise up to help the Black Lives Matter and justice movement, this charity single is a cover of Depeche Mode’s People Are People – a song that spun in the head of producer and musician Chris Wirsig who started this initiative.

“The song struck me during the first protests after the horrible murder of George Floyd, and I still had it in my ear with all the reports of excessive police force and racism around the country, especially with the lyric “I don’t understand what makes a man hate another man,” Wirsig comments. “I felt it’s time to do something, to help our society to overcome injustice and inequality – within the universal language of music. The benefiting organizations of this project are actively working towards a much needed change in our society, educating about social equality, and reporting incidents of racism and injustice. So I gathered many friends who all contributed their skills, due to Covid-19 recording their parts in their respective home studios without even knowing what the others will exactly play or sing, to raise money and awareness for this important cause.”

Some of the musicians involved in the single include Chris Tedesco, Ethan Gold, Wouter Kellerman, and Marian Gold from Alphaville. A full list of artists is provided below. The collaboration of these musicians sends a message to the world that there are those who want to stand up and be heard about the injustices they see around the globe.

Upcoming projects include music for the pilot for a tech-horror web series, "Glitch," an LGBTQ+ animated comedy series, and a charity project with an orchestral cover version of Depeche Mode's "People Are People," a project with over 30 musicians and singers, benefitting several organizations fighting for justice and equality, arranged and produced solely by Chris.

On the songwriting/producing side, Chris started the acclaimed Electro Pop/Dark Wave band no:carrier in 1995 and the Electronica/Chill-Out project Virtual Conformity in 2001, as well as several side projects. He's also co-writing and producing songs with other artists and songwriters like Psyche, Liza Marie Sparks, Queen Chameleon, The Dust Ryde, echoekill, and many others.

After studying audio engineering in the late 1990's, he worked as editor for the musician & tech magazines "KEYS" and "Studio Post Pro," and founded the first German fair-trade record label, NovaTune.

Chris is a Grammy Voting Member, as well as a member of the Society Of Composers and Lyricists, for which he also served as LA Administrator for two years.