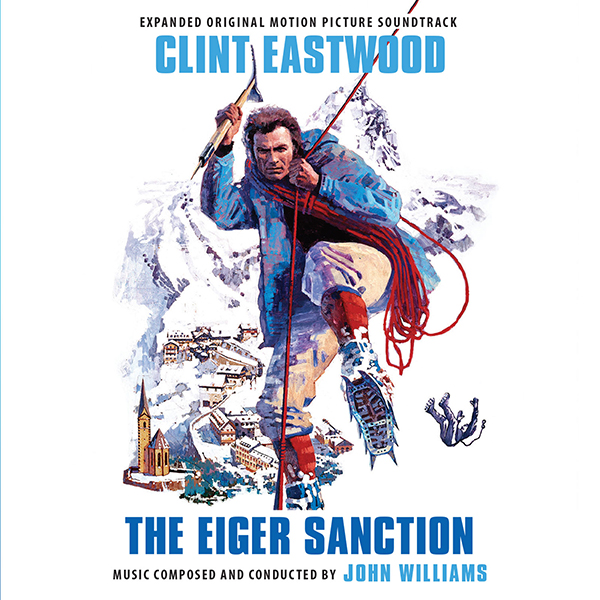 Intrada's latest release features a 2-CD set of John Williams' music for the 1975 Universal Pictures thriller The Eiger Sanction. The score is a masterful example of the composer’s 1970s style, encompassing orchestral and jazz elements, tonal and atonal moments, and memorable themes. From the foreboding theme of the main title to the thrilling action of "The Car Chase" and the majestic "The Top Of The World," the score is a showcase of a composer who was rapidly rising to the top of the industry's game.

The first disc features his complete 75-minute score, offering substantially more music than was represented on the MCA LP, a re-recording that also included tracks often substantially reworked by Williams. While the original scoring sessions were in three-track split-mono, ace producer Mike Matessino has mixed the tracks into a satisfying stereo experience, similar to his prior work on Williams' Earthquake. For the MCA album, Universal Music Group unearthed the original 2″ unmixed multi-track tapes, not only allowing for a state of the art new mix to showcase more detail than ever heard before, but also revealing several additional tracks Williams recorded for the album but which were not ultimately included on the LP release.

In The Eiger Sanction, university professor, art collector and former assassin Jonathan Hemlock (Clint Eastwood) is called out of retirement to perform a “sanction" (“killing") in Zurich, in return for $20,000 and a letter indemnifying him from tax troubles. En route home, he meets a stewardess who promptly seduces him and steals his money. It turns out she’s been sent to convince him to undertake a second assassination during a perilous climb of the Eiger. Hemlock flies to Arizona to get back into shape for the dangerous climb. He reunites with old friend Ben Bowman (George Kennedy); Bowman introduces him to a Native American trainer, who puts Hemlock through his paces. Once in Switzerland, Hemlock and Bowman join three other members of the climbing team. One of Hemlock’s fellow climbers is the target, but he cannot ascertain which before they leave to attempt climbing the north face of the Eiger. Falling rocks kill one and the other two fall to their deaths, leaving Hemlock the sole survivor—and only then does he discover the real killer’s identity.

He did a Clint Eastwood film? I never knew. And one year before he did Star Wars.