James Hutchings [Author]
eBook: The New Death and Others

Death gets a roommate...
An electronic Pope faces a difficult theological question...
A wicked vizier makes a terrible bargain...
44 stories. 19 poems. No sparkly vampires. There's a thin line between genius and insanity, and James Hutchings has just crossed it - but from which direction?

-Tell us about your career and what you are currently working on or involved with?
I fight crime as Poetic Justice, but my day job is acting. You might know me by my stage-name 'Brad Pitt.'
This is the first full-length book that I've put out and charged money for. The main thing I'm working on right now is a poem set in the old West, called 'Confession of a Bounty Hunter'. 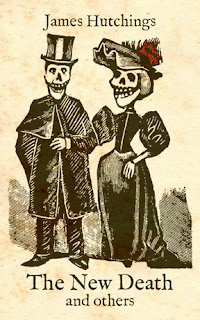 -To whom do you credit your success to, who gives or gave you the most support?
I'm beginning to think these questions are prejudiced against people who aren't successful.

-If you could meet or work with [living or dead], who would that be and why?
Someone quiet and efficient, with no ideas of their own. I'm not actually very good at being creative in a group, and I tend to think you shouldn't ever meet your idols.

-Who inspires you?
My main influences as a writer are probably JRR Tolkien and Jack Vance for the elaborate dialogue. Robert E Howard for the general atmosphere. Terry Pratchett for the humour. and Lord Dunsany for the use of Fame, Time and so on as characters.

-How are things different today, than the same day 1 year ago?
I'm even balder.

-What is the last song you bought or listened to in your musical device?
As I type this, I'm listening to 'The Cave' by Mumford and Sons.

-Last good film you had seen, and the best movie you would recommend to someone asking?
The last good film I saw was probably 'Children of Men'. My favorite film is 'Titanic'.

-What is the single greatest moment in your life?
It was probably one of my experiences with marijuana. Unfortunately I found that it gives me terrible panic attacks, so I don't use it any more.

-Favorite Horror Film?
Do films made for TV count? The BBC made one out of the story 'The Woman In Black' which terrified me for literally years afterwards. Apparently the same story is currently being made into a feature film.

-Favorite Book?
I mostly read short stories these days, rather than full-length novels. Here are some of my favorites.

HP Lovecraft, The Doom That Came to Sarnath
Robert E Howard, The Tower of the Elephant
Clark Ashton Smith, The Garden of Adompha
Franz Kafka, Jackals and Arabs
Ursula Le Guin, The Ones Who Walk Away From Omelas

-Favorite Thing In Your Home?
My computer, or 'my internet connection' if I can count that as a thing.

-Favorite First Pet?
My first pet was a cat called Rainbow, who I don't actually remember much about. But I've been a cat-lover all my life, so it must have done something right.

-Favorite Phrase?
"I should be ashamed to say that I had risen from the ranks. When I rise it will be with the ranks." Eugene Debs.

-Favorite Hiding Place [Not that we are looking]?
Thus far I have encountered no problems hiding from my adoring public.

-If you could tell someone something someone told you, "words to live by" what would that be?
'Have sexual intercourse with James Hutchings.' If more pretty ladies, or indeed any, would live by these words, the world would be a better place (for me).