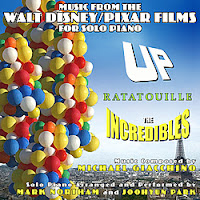 Info: New Recording Spotlights Michael Giacchino’s Scores For These Beloved Films Performed by Pianists Mark Northam and Joohyun Park
BuySoundtrax Records is proud to announce the release of Music From The Walt Disney/Pixar Films Up, Ratatouille, The Incredibles For Solo Piano featuring piano performances by Joohyun Park (The Incredibles) and Mark Northam (Up, Ratatouille) of Michael Giacchino’s music from these beloved films.  The recording, which features extensive liner notes by Jeff Bond, will be available digitally on January 24th.
Michael Giacchino’s career included composing numerous videogames for Walt Disney. In 2004, Giacchino, who had moved to TV as the composer of Alias and Lost was hired to write music for his first feature film, Walt Disney/Pixar’s The Incredibles. -- an animated film about a family of superheroes.  The Incredibles featured an upbeat jazz orchestral sound and became both a critical and commercial success. In 2007, he teamed again with Incredibles director Brad Bird for the animated film Ratatouille, which earned Giacchino his first Academy Award™ nomination.  After tackling more adult fare, including Cloverfield and Star Trek, Giacchino would once again be part of a Disney/Pixar production, 2010’s Up, which would earn Giacchino his first Oscar.
UP-Up With Titles
UP-We're In The Club Now
UP-Married Life
UP-Carl Goes Up
UP-Paradise Found
UP-Kevin Beakn
UP-The Nickel Tour
UP-Stuff We Did
UP-Memories Can Weigh You Down
UP-It's Just A House
UP-Up With End Credits
UP-The Spirit Of Adventure
RAT-Le Festin
RAT-This Is Me
RAT-Wall Rat
RAT-Souped Up
RAT-A New Deal
RAT-Remy Drives
RAT-Special Order
RAT-Losing Control
RAT-Abandoning Ship
RAT-Main Theme
INC-The Glory Days
INC-Huph Will See You
INC-Life's Incredible
INC-Life's Incredible (alt)
INC-Off to Work
INC-Missile Lock
INC-Life or Death
INC-The Incredits
If you love these movies and you love piano... guess what you will love this. It's a very calming collection of popular Disney/Pixar creations charming us with the work of Michael Giacchino.
-Jeremy [Two Thumbs]
Hosted by Unknown at 8:08 AM