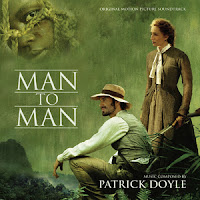 Scottish composer Patrick Doyle needs no further introduction to film music fans, but let’s just try to condense what he has achieved so far since he made his over-night break-through with Kenneth Branagh’s Henry V in 1989: two Oscar nominations, two Golden Globe nominations, the winner of multiple prestigious awards, fruitful collaborations with acclaimed directors such as Kenneth Branagh, Brian de Palma, Mike Newell and Régis Wargnier – the director of Man to Man.
MovieScore Media’s tenth entry in the ‘Discovery Collection’ features the proud and epic score from this ‘adventure movie with brains’, composed by Patrick Doyle in his most lyrical, melodic and exciting mood. Exquisite orchestrations, beautifully brought to life by the London Symphony Orchestra, elegant counterpoint (a trademark asset in Doyle’s music) and engaging rhythmic writing makes Man to Man one of the composer’s finest works, crowned by a magnificent main theme! .
01  Suite from "Man to Man"
02  Main Title and The Rapids
03  Paying the King
04  Capsized
05  Sea Sickness
06  Abigail's Feeling
07  Measuring the Pygmies
08  Pygmy Chase
09  Hitting Trees
10  Likola Kills
11  Alexander's Arrow
12  The Net
13  Apes and Mankind
14  Baby
15  The Kidnapping of Likola
16  Alexander Cut
17  Catching Elena
18  In the Snow
19  The Return of Likola
20  Monkey Waltz


I really enjoy Patrick Doyle's work from a actor and best known for being an outstanding composer since 1988 to now. So there is nothing much I can say that you don't know, he is a fantastic artist and creates elegant waves and flowing in the music style. Epic and outstanding is how I am describing "Man To Man" and would except any less from Doyle... he does not disappoint.
-Jeremy [Two Thumbs]
Hosted by Unknown at 1:00 AM