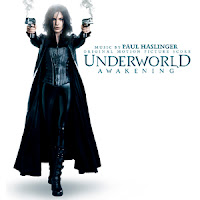 
Info: Underworld Awakening brings a stunning new dimension to the epic battle between the Vampires and Lycans, as the first film in the franchise to shoot in 3D.  Kate Beckinsale, star of the first two films, returns in her lead role as the vampire warrioress Selene, who escapes imprisonment to find herself in a world where humans have discovered the existence of both the Vampire and Lycan clans, and are conducting an all-out war to eradicate both immortal species.
01. The Purge
02. Underworld Awakening Main Titles
03. Raiding the Army Surplus Store
04. Non-Human Aggressor
05. I Was Subject 2
06. Arriving at the Coven
07. I’ve Never Seen a Child Like This
08. This Is Not One of Us
09. I Know Exactly What You Are
10. If You Knew Him As I Did
11. Prepare the Armory
12. The Uber-Lycan
13. Reanimation
14. Then Came the Purge
15. Selene Returns to Antigen
16. Find Her and Destroy Her
17. The Lycan Van Escape
18. I Heal Instantly
19. You Came Back
20. Reclaiming the World
21. The Melancholy of Resistance
22. A New Dawn
23. Corner (Justin Lassen Remix) - Blue Stahli
24. Under Your Skin (Deadbeat Remix) - Aesthetic Perfection
25. Sunrise - Angelspit


This is the forth film, but the third in the series due the third film "Underworld: RISE OF THE LYCANS" was a prequel... though you know this. Score is the return of Haslinger to the composer helm again as he has been part of the series for three of the films. It has a great underlying theme that knows when to attack your hearing, it helps move the film along.