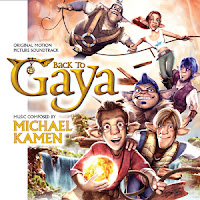 
Info: We are proud to announce that we will release the legendary Michael Kamen's original orchestral score from the German fantasy animation Back to Gaya on CD and online. The completion of the score was an extraordinary achievement as the composer tragically, in the midst of composing the music for the film, passed away. Committed to fulfill the vision of Kamen, complementing the music he had written specifically for Back to Gaya with a selection of his unused compositions from previous film projects, a team of composer and orchestrators headed by Kamens long-time associates Steve McLaughlin (producer/recording engineer) and Christopher Brooks (producer/music editor) finalized the score to fit the film perfectly. MovieScore Media's album features 62 minutes of grand orchestral, adventurous and highly entertaining Michael Kamen music performed by the London Metropolitan Orchestra.
In honour of the late maestro, MovieScore Media will share a portion of revenues generated by the album with Mr. Holland’s Opus Foundation, which was founded by Michael Kamen in 1996 as his commitment to the future of music education.
01 Main Title
02 Snurks
03 Flying
04 The Kiss
05 Fireworks
06 The Professor
07 The Race
08 Baby Chase
09 The Vortex
10 Wrecking Ball
11 The Toy Store
12 Balloon Crash
13 Rat Chase
14 The Sewer
15 Find a Way In
16 In Charge
17 Switched On
18 So Unusual
19 Free Will
20 Night Flight
21 Big Dumb
22 Robot Chase
23 Climb
24 Catching Dolomite
25 Manual Targeting
26 We're Free!
27 The Mayor Runs
28 Back to Gaya (Last Cue)


Okay I am thrilled about this release for several reasons and I hope to give you my reasons and why you should get this score to "Back To Gaya". First it is a great moving epic piece of a jousting score, what you might come to expect to an animated film. Second it's Michael Kamen and this being one of the last few works/involvements of his career before his death in 2003 at the age of 55. It is wonderful piece of music that MovieScore Media was able to get this produced and for us to enjoy. Third the "Mr. Holland’s Opus Foundation" will benefit from profits made from the sales of this release, this is a foundation set up by Kamen. All that being said, I really am enjoying this score as I find myself listening as I write this because that is how I do it... I know I will be adding this to one of my favorites for 2012.
-Jeremy [Two Thumbs]
Hosted by Unknown at 7:39 AM