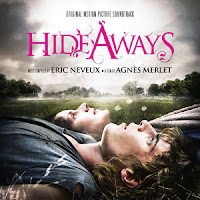 
Info: Award-winning composer Eric Neveux has written a beautifully melodic and harmonically rich orchestral score for Agnès Merlet’s acclaimed fantasy drama. Essentially a love story, the film is about a young man who possesses an extraordinary power which ultimately forces him to retires to the depths of the forest.
Neveux’s music for the film underlines its fantastic elements and gives the story the musical form of a darkly romantic fairy-tale. People will compare the writing and approach to that of many fine Danny Elfman scores – but with a distinct European voice, more fully developed thematic ideas and perhaps somewhat more economic orchestrations.
Music is beautifully performed by the Philharmonic Orchestra in London under the baton of veteran film music conductor Allan Wilson. MovieScore Media releases the soundtrack in collaboration with UK label Pale Blue, who are also handling the digital distribution of the album.
The Depth of the Forest (Theme from "Hideaways")
Opening
The Furlongs
Another Baby
A Boy Like No Other
Stronger Than Illness
Shadow in the Woods
The Curse
Escape from the Real World
Abandoned Souls
Mae and James
Night at the Hospital
Waking Up the Birds
Extraordinary Powers
The Sacrifice
Two Lovers
The Story of James
With Love and Faith - Bless
Hideaways (bonus track)

This is a whisking score bringing the fantasy/drama style to each note by Eric Neveux as you go from track to track. Some of the highlights like; "Shadow in the Woods", "The Curse" and "The Sacrifice" really bring out a certain charm and epic heights to the overall score. There is also a song "With Love and Faith" by Bless which brings a beautiful close to all ready a fine score.