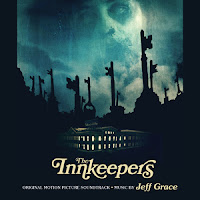 
Info: Ever since composer Jeff Grace (Stake Land, The Last Winter, The House of the Devil) and director Ti West took their first impressive steps with The Roost in 2005, MovieScore Media has been among their most devoted fans and supporters. This is the fourth Grace/West score that we release and we are proud to witness the rise and growing success of these two great talents. Jeff Grace’s music for The Innkeepers is ingeniously atmospheric and somewhat old-school in its orchestral approach, eerie, yet quite melodic - there is something about it that reminds us of Jerry Goldsmith in the 70s and 80s. The quality of the score has already been confirmed at Screamfest where Jeff Grace won the festival trophy for ‘Best Musical Score’. As with many films Grace has scored, a lot of reviews of The Innkeepers single out the score as one of its strongest elements and one the fits Ti West’s directing style extremely well. As music on its own it stands out as original, fresh and inventive. And... scary as hell!
01 The Innkeepers
02 Claire’s Room
03 Right Behind You!
04 The Garage
05 The Story of Madeline
06 The Pendulum
07 What Does She Want?
08 The Pendulum Breaks
09 Special Memories
10 I Gotta Get Outta Here!
11 Last Bit of Nostalgia
12 Claire Falls
13 Epilogue
14 End Titles (Suite from The Innkeepers)


Are you scared, I ask again are you scared? Well you should be Jeff Grace does it again in his latest release "The Innkepers" and he seems to know how to push the plain of on how to scare us. Grace's work is becoming well-known in the horror community as well in his edgy untamed style is making him one of the best composers in the last several years. If you have not heard his music I encourage you to check out this and other works: The Roost/Joshua • The Last Winter • Trigger Man • I Sell the Dead • The House of the Devil / I Can See You
-Jeremy [Two Thumbs]