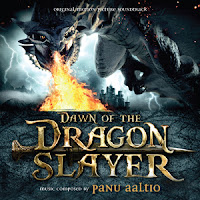 Panu Aaltio's score for The Home of Dark Butterflies, released on CD by MovieScore Media in 2009, received a lot of acclaim from fans and critics alike. The Finnish composer is now back with an impressive score that showcases another side of his musical vocabulary: this is a big, epic, majestic, exciting and powerful adventure score where an outstanding thematic approach to the heroic aspects of the story forms the backbone of the score.

Also known as Paladin, Dawn of the Dragonslayer is a fantasy epic that is released on DVD in UK on February 13, co-coinciding with our soundtrack album release. There is some truly ear-shattering, 'on-the-edge-of-your-seat' action scoring in Aaltio's score, but it's probably the driving and up-beat heroic themes that will make this score very popular among fans of big and epic film music. Enjoy!

First edition of the CD is limited to 500 copies.

Track titles:
01 Paladin's Theme (Search for the Dragon)
02 You're Doing it All Wrong
03 A Paladin's Journey
04 The Dragon Kills
05 In Training
06 Will and Kate
07 Dragon at the Castle
08 The Search for Kate
09 The Dragon Lurking
10 Forbidden Love
11 The Battle
12 Alone in the Cold
13 Rise of a Paladin
14 The Duel and the Dragon
15 A Triumphant Return (Suite from Dawn of the Dragonslayer)


Okay I am digging this score Panu Aaltio is virtually new onto the new composer scene, this doesn't mean this isn't an amazing score... it is amazing. It's got style and grace which will bring you whisking you to a time of dragons that is scattered in a epic fantasy. Aaltio really holds his own and finds himself welcomed and accepted into the league of other great composers. Those who don't agree with me, look behind you there is a dragon... and you without a sword, how sad for you.