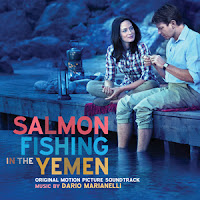 From the director of Chocolat (Lasse Hallström) and the Oscar®-winning screenwriter of Slumdog Millionaire (Simon Beaufoy) comes the inspriational comedy Salmon Fishing in the Yemen.  When Britain’s leading fisheries expert (Ewan McGregor) is approached by aconsultant (Emily Blunt) to help realize a sheikh’s (Amr Waked) vision of bringing the sport of fly-fishing to the desert, he immediately thinks the project is both absurd and unachievable.  But when the Prime Minister’s overzealous press secretary (Kristin Scott Thomas) latches on to it as a “good will” story, this unlikely team will put it all on the line and embark on an upstream journey of faith and fish to prove the impossible, possible.
01. Prologue
02. Machinations
03. Scotland
04. Inspirational Sheikh
05. Dreams
06. A Turn for the Worse
07. To The Yemen
08. The Threat
09. It's In Your DNA!
10. Salmon Fishing
11. Big Projects
12. Rob Returns
13. Disaster
14. Goodbye Hello
15. Happy Ending
16. Bonus Bach


Okay you are not going to believe me when I tell you this, because I have only really started reviewing score music for a short time. I have been listening to scores/soundtracks for some 25 years, so I know what I like and in most cases I like the music sometimes more than the film. In this case I have never heard of this film, but knew I loved  Dario Marianelli and here he does not disappoint. He is able to turn out a wonderful score here and he switches his styles from project to project. Grabs you in this soft sweeping way, able to make it almost magical. I was turned onto his music from "The Brothers Grimm" and then "V For Vendetta"... most recent his "Jane Eyre"... epic composer... I think so.
-Jeremy [Two Thumbs]