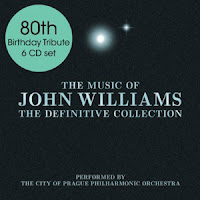 Featuring 88 Tracks With Over 7 Hours of Music

Since 1972, when he won his first Oscar, John Williams has received 47 Oscar nominations including 5 wins, 2 Emmys, 3 Golden Globes, 7 BAFTAs and more then twenty Gold and Platinum Records. Today, he is one of the most respected and acclaimed composers in Hollywood.

Perhaps the film composer of the biggest number of instantly recognizable themes and motifs, John Williams's immense musical output has now secured him a “cultural icon” status. On February 8th this icon turned 80.

The immense quantity and quality of John Williams's film scores has propelled his work into the top All-Time Worldwide Box Office films list - he scored 16 of them, more than any other composer. In 2005, the American Film Institute unveiled its list of the Top 25 Film Scores of all time and John Williams appears at #1 (Star Wars), # 6 (Jaws) and # 14 (E.T. The Extra-Terrestrial).

“John certainly has the most considerable impact because his music immediately bypasses the brain and goes straight to your heart. That's the way he's always been... an amazing talent."
- Steven Spielberg

The collection is performed by The City of Prague Philharmonic Orchestra.
Happy Birthday... Mr. Williams!
You have been a great composer and this is a awesome tribute to a lifetime of memories. City of Prague Philharmonic Orchestra work captures the styles and grace of a true asset to that is John Williams. May the chorus be with you, always! What better way to celebrate this with a full collection of his works in one place, yes did you read it right 6 cd's worth...
-Jeremy [Two Thumbs]