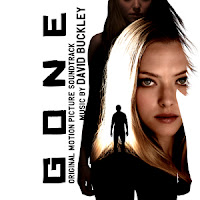 Info: In the suspense thriller, Gone, Jill Parrish (Amanda Seyfried) comes home from a night shift to discover her sister Molly (Emily Wickersham) has been abducted.  Jill, having escaped from a kidnapping a year before, is convinced that the same serial killer has come back and taken Molly. The police think Jill is crazy and are unwilling to use their resources to help her.  Afraid that Molly will be dead by sundown, she sets out alone on a heart-pounding chase to find the killer, expose his secrets and save her sister.
01. Forest Park
02. Going Home
03. Empty House
04. Police are Waiting
05. Jill Runs for Her Life
06. Darkness Falls
07. Alameda Car Pursuit
08. Confronting Jim
09. Molly is Safe
10. Evidence
11. Leaving the Forest
12. End Titles


A very suspense driven score done by "David Buckley" as each track seems to build on the next one as one would expect. I am digging the music, with only one complaint that it is a tad short, but without seeing the film yet it might need to be longer. Buckley is doing a crossover from short film and television work to mainstream films that include; "The Town", "From Paris with Love", "The Forbidden Kingdom", e.t.c.
------------------------------------
Hosted by Unknown at 9:15 AM