Three Stooges at the Races... 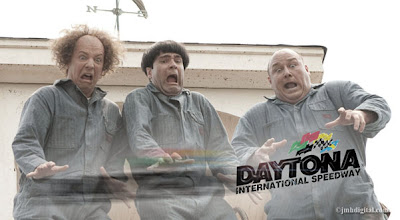 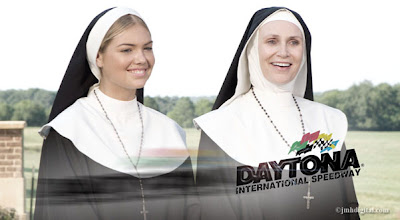 It's Coming Up Fast.
Sean Hayes, Chris Diamantopoulos, and Will Sasso -- starring as Larry, Moe & Curly – in the all new The Three Stooges movie from Twentieth Century Fox, will start the action by delivering the green flag at the Daytona 500, NASCAR’s most prestigious race, on Sunday, February 26th (FOX, 1 p.m. ET).
As Grand Marshals, co-stars from  the new Three Stooges movie  Jane Lynch and Kate Upton will deliver the four most famous words in motorsports – “Drivers, start your engines.”
Fans can stay connected with Daytona International Speedway on Facebook (www.facebook.com/DaytonaInternationalSpeedway) and Twitter (www.twitter.com/disupdates) and fans can also follow NASCAR (@NASCAR) and hashtags #NASCAR and #DAYTONA500.
Visit www.threestooges.com and Facebook (www.facebook.com/thethreestooges) for all the latest Three Stooges movie news.
In The Three Stooges, which hits theaters everywhere April 13, 2012, newborns Larry, Moe and Curly are left on the doorstep of an orphanage run by nuns.  The boys grow up finger-poking, nyuk-nyuk-nyuking and woo-woo-wooing their way to uncharted levels of knuckleheaded misadventure.  Out to save their childhood home, only The Three Stooges could become embroiled in an oddball murder plot…while stumbling into starring in a phenomenally successful TV reality show.