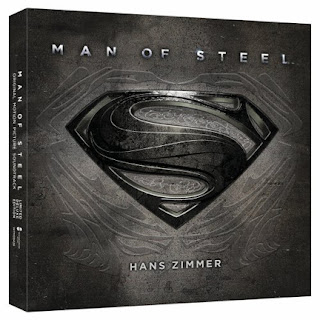 
Editorial Reviews [Amazon]
Academy Award, Grammy, and Golden Globe-winning composer Hans Zimmer composed the music for this highly anticipated project, joining forces for the first time with director Zack Snyder.
The challenges of creating a Superman score are daunting because Superman is so iconographic, said Snyder. I really feel like what Hans created is perfect. Subtle and stirring, epic and commanding. Honestly, Hans crushed it.
Both the standard and deluxe editions will include the epic track Man of Steel (Hans Original Sketchbook) which clocks in at over 28 minutes long. This exclusive track is performed solely by Zimmer, and allows listeners to experience firsthand his initial experiments with the film's music, which ultimately lay the foundation for the film's final score.
The deluxe edition will be housed in a special embossed steel case, contain 24 score selections, and give fans the ability to access multiple videos showing an exclusive, behind-the-scenes look at the creation of the music.
Those fans who purchase the CD version of the deluxe edition will have the opportunity to download all 24 songs in DTS Headphone: X, which reproduces a cinematic multi-speaker surround sound experience using only the user's headphones. DTS Headphone:X presents a whole new way to hear mobile entertainment over headphones. The technology garnered rave reviews from the likes of The Wall Street Journal, and Cnet, among others at this year s CES convention.
In addition to his orchestral arrangements, Zimmer, no stranger to stepping outside the confines of traditional film scoring, has assembled two unique musical entities to contribute music to Man of Steel. The first, a drum orchestra, which was brought together for the album, is described by soundtrack co-producer Peter Asher as some of the best drummers in the world all playing simultaneously in a space designed for a symphony orchestra using not only rock drum kits but tympani and field drums as well.
The membership of this elite assembly consists of many of today s top musicians including John JR Robinson, Jason Bonham, Josh Freese, Pharrell Williams, Danny Carey, Satnam Ramgotra, Toss Panos, Jim Keltner, Curt Bisquera, Trevor Lawrence Jr., Matt Chamberlain, Ryeland Allison, Bernie Dresel, Vinnie Colaiuta and Sheila E. Their contribution, under Zimmer's musical direction, creates a towering and powerful musical accompaniment to the film.
Another distinctive group the composer assembled was a gathering of eight of music's finest pedal steel guitarists who play classical string section parts. This collective, consisting of Chas Smith, Marty Rifkin, Skip Edwards, Boo Bernstein, Peter Frieberger, Rick Schmidt, JD Maness, John McClung, was described by Asher as, a uniquely new metallic orchestra added it's own distinct and soaring musical stamp to the soundtrack.

Been mixed feeling about this, though I am sure I will love it... what I have heard it will be in my collection soon enough.
-Jeremy [Retro-Z]
Hosted by Unknown at 8:11 AM

I was impressed when Zimmer said the technology is essential for his work to be heard in surround sound.  “I can’t stand it,” he said. “It’s just stereo. When I write, I write in surround. My life is in surround. Why would I settle for less? … I’ve been waiting for this moment where I can actually go and listen to one of my soundtracks without going, ‘Oh dear, it’s only stereo.’” That alone makes this worth getting.

Oh this looks cool. Thanks for the heads up!