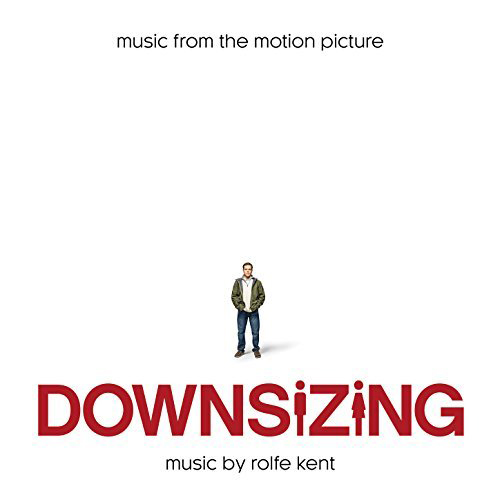 WaterTower Music will release the Downsizing - Original Motion Picture Soundtrack at digital retail on December 22, 2017 and on CD January 12. The album features original score by Rolfe Kent (Up In The Air, Sideways) and the original song “A Little Change In The Weather,” co-written by Kent and performed by The Swingles. Paramount Pictures’ Downsizing will be in theaters on December 22, 2017.

“Rolfe Kent and I agreed that no matter what the music was meant to express, we wanted it as charming, melodic and full-throated as possible,” said writer/director Alexander Payne.  “Rolfe and I have worked together for over 25 years, and this was, I feel, the finest score he has yet produced, and, if you’ll forgive the immodesty, as fine a score I’ve heard in any film in recent memory.”

“Alexander asked for the score to be beautiful classical music,” Kent described.  The composer wanted to avoid film score clichés and took a different route.  “I figured a Kubrickian approach was best, where the music sounds like it existed outside of the film, and was discovered to match the scene perfectly.”   Known for using unexpected textures, sounds and his own signature musical personality, this opened the floodgates for Rolfe.  “As ever, Alexander was open to hearing unexpected sounds, so when I threw him the curve of an opera aria sung in Norwegian, or some bagpipes, he loved it.”

“One of the first scenes I was shown was a monologue from Ngoc Lan Tran (Hong Chau), which is this terrific performance and contains so much energy and pathos and sweetness,” Kent explained.  “One morning at 5AM I found myself dreaming of this fragile cello tune that came out in small, delicate sobs almost, and I had to wake myself up and record myself humming it, because I knew it was perfect for her character. As the score developed we sometimes changed the instrumentation, but that moment is still as I dreamed it, delicately played on cello.”

In addition to his score, Downsizing gave Kent the opportunity to co-write an original song, “A Little Change In The Weather.”  Using the Norwegian opera aria, he had the idea that this would become the song to start the end credits, rounding out the story.  “I knew exactly who could help me with the writing of it, and also elevate it into something extraordinary, and that was Jo and Ed of The Swingles!” Kent described. “I had some rough place-holder words, but they then completed the final lyrics and composed some 30 vocal parts.  When Alexander and I heard what they had created we were amazed and thrilled.”

"What a privilege to be working again with Rolfe and Alexander - long time friends of the label" commented WaterTower Music head, Jason Linn. "Their timeless blended voice continues to move, amaze and defy musical convention. We are thrilled to partner with this creative force!”

The Downsizing - Original Motion Picture Soundtrack is now available for pre-order, and will be available at digital retail on December 22, 2017 and on CD January 12.